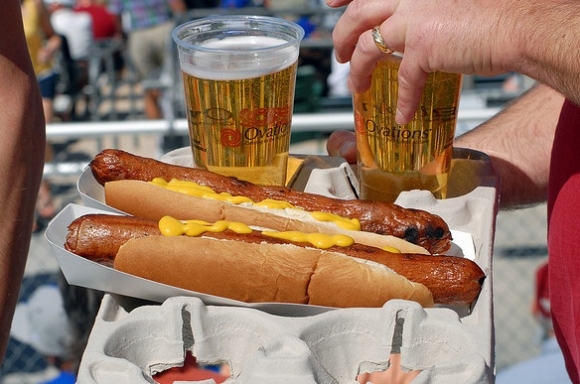 With Opening Day quickly approaching, the Boston Red Sox have brought forth yet another trick to entice fans back to Fenway Park: appealing to their stomachs.

Interest in the Sox is approaching a nadir; after the 2011 collapse and the Bobby-V disaster in 2012, fans just don’t care as much as they did only a few seasons ago. Ownership is finally starting to acknowledge it through Larry Lucchino’s admission that the phony sellout streak may end this year, but that doesn’t mean they have given up hope.

The Red Sox have unveiled their latest gimmick to attract fans: lower concession prices for the month of April. The new plan states that beer will be sold for $5, hot chocolate will be sold for $2, and hotdogs will be sold at a 2-for-1 rate. Basically, Fenway is selling food at a reasonable price for once, but only for a limited time.

It’s not that cheaper food is something to be angry about, it’s the fact that the owners realize that the Red Sox are not as interesting as they used to be and so the only thing they do about it is sell food at a reasonable price.

If the Sox want to attract fans, then they simply need to play well; except for Atlanta, that's a tried-and-true concept. Fans want to see a team that cares and plays well together; what the Sox have had is a cast of overpaid divas who are there for no other purpose than to keep pink hats satisfied. Perhaps this season could be their best. With the possibility of José Iglesias, Jackie Bradley Jr, and Will Middlebrooks all on the Opening Day roster, we will see a team that has heart, not just greed. Manager John Farrell has yet to announce whether or not Bradley will join the team in New York, but our guess is that if he truly has a cogent plan for the team, he will give Bradley the call.

If the Sox truly want their fans back, then they need to let their record speak for itself. Otherwise, even free food giveaways won't be enough to lure the faithful back to Fenway.