Published on 4-Oct-2013 by Tyler Scionti 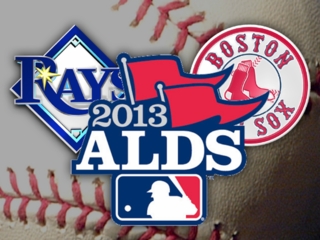 Get ready for some excitement today as the Red Sox prepare to face what may be their biggest rival of the decade, the Tampa Bay Rays.

You heard it, New York. Not the Yankees. The Rays!

It’s a matchup for the ages as the Tampa Bay knocked the Sox off their pedestal in 2008 and then played the spoiler in 2011. Now, it's Boston’s turn.

When Joe Maddon said the Rays would face the Sox in the playoffs, millions of fans checked to see what was really in his water bottle. But now he has the last laugh, as the Rays rolled on over Texas and then Cleveland, yielding only two runs over 18 innings as they proved time and time again that all they really have going for them is their pitching.

Next to their southern foes, the Sox have an adequate pitching staff, but are by no means great.

You can’t deny it. The Rays have been on a roll of late, and it will all depend on Jon Lester -- who will take the mound in Game 1 -- and John Lackey -- who will follow up in Game 2 -- to stem the momentum. After that, the Sox pin their hopes on Clay Buchholz and Jake Peavy, should the series go to four games.

Lester has had a decent second half, posting a 7-2 record alongside a 2.57 ERA and 3.36 K/BB ratio. Lester will be facing Matt Moore on Friday afternoon, an equally imposing lefty, as the Rays hope to get off to a hot start in the ALDS.

The key for the Sox will be offense; they have the best bats in the league by far, as their lineup features the likes of Jacoby Ellsbury, Dustin Pedroia, David Ortiz, and Mike Napoli. If, and that is a big if, they can click at the right moments and drive in runs on a consistent basis, the Sox can easily manhandle the Rays.

Only time will tell how things will work out for the BoSox, and time is ticking as they await the start of Game 1 this afternoon.