Published on 9-Oct-2013 by Tyler Scionti 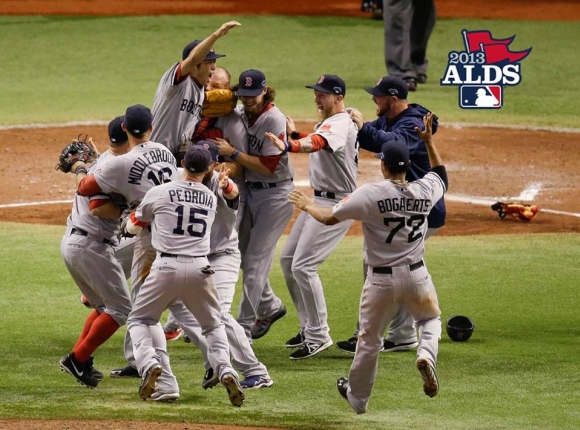 Well they did it. The Boston Red Sox have actually made it past the Tampa Bay Rays and will advance to the American League Championship Series.

Perhaps Joe Maddon will be kicking himself in the butt all the way to April, as he regrets his poorly thought out prediction of a forced Game 5.

In the end, though, it was Maddon who actually won the game for the Sox. Boston's offense was weak through the first six innings as it continually fudged every chance it got to get on the board. Despite all that, and despite all the success his pitching staff had against a relatively quiet Sox offense, Maddon felt the need to use every single pitcher in his bullpen. In the end, the irony was this: after Maddon maneuvered through the early innings by using pitchers in unaccustomed roles, it was Ray relievers in their usual slots who fell short.

Boston came back from a late 1-0 deficit to break through against the Rays seventh-inning set-up man, flamethrowing Jake McGee, taking a 2-1 lead then and adding an insurance run in the ninth against Tampa Bay's mercurial closer, Fernando Rodney.

Jake Peavy took the ball for the Sox from the outset, and along with the bullpen, pitched beautifully as Boston held the Rays to one run over nine innings. Peavy tossed 5⅔ innings while throwing just 74 pitches; then, Craig Breslow came in to take over and the rest was history.

As the celebration faded into the night, just like the Rays’ chances at a 2013 World Series run, it's now time to get back to business.

The Tigers will face the A’s on Thursday night in a crucial Game 5 that will determine who will go on to the ALCS to face the Red Sox. Game 1 will be played this Saturday. The Red Sox send Jon Lester out on Game 1 as they look to confirm the feeling that playoff baseball in Boston will once again become a regular occurrence.