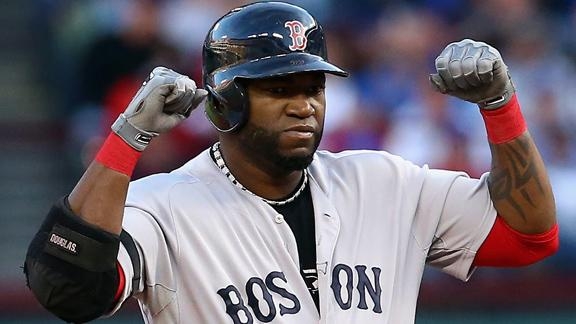 The first half has been enjoyable for the Boston Red Sox as the All-Star break begins.

Now it's time for some pleasant reflection.

In 2012, the Sox went an abysmal 69-93. When this season began, the cast of good guy types and feel good stories just did not give much hope to Sox fans looking for something to believe in. It's 97 games later, and the Sox sit atop the AL East with an MLB-best 58 wins, just 11 short of their win total for all of last year.

Now that we're midway through the season, let’s hand out a few awards to players who have stood out in the first half and deserve some special recognition.

This one is a no-brainer; the scrappy second baseman is having his best season in years and has played with his heart on his sleeve more than usual. It was revealed that Pedroia tore his UCL in the first few games of the season, but that did not stop him from playing 96 of 97 games. Pedroia has been outstanding offensively posting a .316/ .396/ .436 line and has been a vacuum at second base having made one error all season.

Patrice Bergeron would be proud. So would Greg Campbell. Boston strong.

Count this one as the most unlikely winner of the team Cy Young, but the big righty deserves it more than anyone.

Lackey has a humble 7-6 record, but that is a poor indicator of his true worth. Lackey has posted a 2.78 ERA while striking out a career best 8.3/9. It’s hard to say that we saw it coming, but apparently one person pegged it in spring training. Lackey has been dominant all season as he continues to distance himself from the mediocre start he had in Boston. He truly has been the staff ace from the start.

While Big Papi might be facing the back end of his career at 37, he continues to beat Father Time. The Sox put most of their hopes in the big slugger and he has not disappointed. Ortiz leads the Sox in batting average (.317), home runs (19), and RBI’s (65). Despite being in the twilight of his career, Ortiz looks like the Big Papi of old. The Sox offense has been the best in baseball, and with Ortiz in the mix, it is not hard to see why.

Those are our awards for now. As the season stretches on into the final months, they may change. But as of now, they stand as such.

The Red Sox have been a fun team to watch. They beat the odds and meshed together, for whatever reason, as they continue to prove the doubters wrong and win. They're in a tough division, but they're braced to be the team to beat in what could be one of the most exciting pennant races in years.