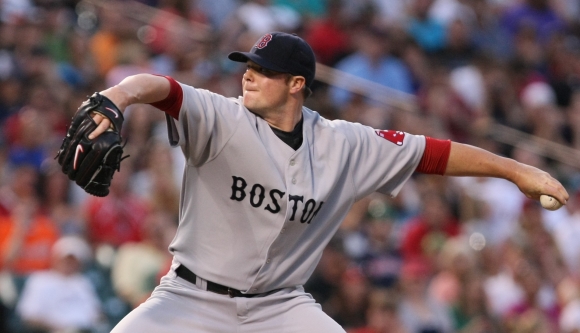 There is a word for the Boston Red Sox starters of late, and I believe that the technical term is 'stupid good.'

The Bosox finished off a sweep of the Tampa Bay Rays, and improved to 8-4 on the season. The name of the game has been pitching for the Sox, and looking at how the starters have done this series, it leaves little doubt as to why the team has been so successful.

Jon Lester threw seven innings of one-run ball on Saturday to hand the Sox a big win in the series opener. The Rays have long been the Sox’s kryptonite, but it appears that those days are long over. Lester struck out five while walking one, and should have had the win if it were not for Joel Hanrahan’s continuous unraveling.

While Lester was good on Saturday, Clay Buchholz was downright nasty on Sunday. He was utterly dominant the entire game, it was his to control as he bobbed and weaved his way around the plate completely baffling a Rays offense that came up quite lame. It may have been the best performance a Sox starter has given all season, rivaling Jon Lester’s terrific gem versus the Blue Jays. While we can go back and forth about how Buchholz lost what would have been his second no-hitter of his career, one thing everyone can agree on is that it is good to see Buchholz this sharp to start the season.

Lester and Buchholz have thrown a combined 41 innings while giving up four runs and striking out 41. They are arguably the best one-two combination in MLB right now, and with the both of them pitching in a series, there is no reason the Sox shouldn’t walk away with two big wins more often than not.

Perhaps the unsung hero of this pitching staff, though, is the Number Three man, Ryan Dempster. Many speculated that Dempster wouldn’t be able to stand the heat in the American League East. Well, it seems that after Monday’s start, he has proven many of the doubters to be wrong. Dempster is 0-1 on the season, but he has a 2.65 ERA and has struck out 25 batters over 17 innings of work, proving he has what it takes to shut down opposing teams.

Pitching has long been the strength of many good teams, and the downfall of the Red Sox. Going forward in 2013, the Sox seem to be in an excellent position as they hope to make their mark this season.