BoSox Help, then Hinder the Bombers in their Playoff Quest 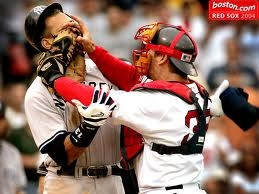 The Boston Red Sox took a step closer to the American League East title this week.

And at the same time, they may have given their arch-rivals the push they need to sneak into the playoffs.

Boston took two of three from the reeling Tampa Rays while the Yankees were winning three of four in Baltimore. The result seems to solidify the perspective that the Red Sox are-shoo ins to win the East. Meanwhile, the Yankees got closer to a wild card spot.

If they secure it and then win that game, their opponent would be none other than Boston if the Sox finish with the best record in the American League.

That may be the worst-case scenario for Boston, as the Yankees would come into the series as an underdog with no pressure on them. Even though New York has been hit hard by injuries this season, they still have Robinson Cano, Alfonso Soriano, and subject to his appeal hearing on Mon 30 Sep, Alex Rodriguez.

Plus, if their pitching stays consistent, the Bronx Bombers could give the Red Sox fits in October. Countering that, the BoSox have gotten good pitching all season and now have Clay Buchholz back after a three-month absence. Buchholz is 10-0 on the season, and if the Sox have him in October, they will be logical the favorites to win the American League title.

If this scenario plays out, here we go with another Yankees-Red Sox series in October. And we're getting yet another preview of it this weekend.

Boston took the opener of their three-game set with New York in Fenway park, as Jared Saltalamacchia hammered the telling blow with a grand-slam in the seventh to snap a 4-4 tie. That makes today's game a desperate one for the visitors.

Expect the drama to carry all the way through the month. And possibly further.