Published on 5-Oct-2013 by Tyler Scionti 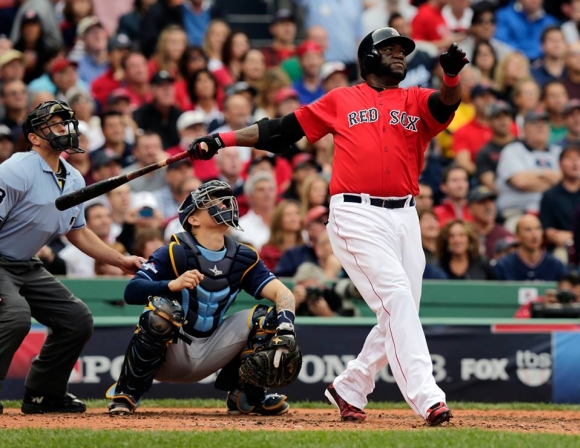 Someone cue the duck boats because the Boston Red Sox are rolling right on over the Rays as they took Game 1 of the ALDS in dramatic fashion.

All we heard about from the start of the series was pitching. Pitching this; pitching that; the Rays have the best pitching staff in the MLB and will shut the Sox down.

Tampa Bay did have momentum on its side, after all. Prior to playing the Sox, they did give up just two runs over 18 innings of work. Heck, even Sox owner John Henry was ready to give up on his centerpiece investment, claiming the Rays are tougher than any other opponent the Sox could have faced.

Then the Sox scored 12 runs to completely demoralize Tampa Bay and prove the doubters wrong. Jon Lester gave up two runs over 7⅔ innings of work, but he could have bombed the start and no one would have noticed. The Sox scored five runs in the fourth, courtesy of doubles by David Ortiz, Jonny Gomes, and Will Middlebrooks. Then they erupted for three more runs in the fifth. After the four-run eighth, many fans started to call it a night as Boston completely buried their 'rival' to set the tone for the series. Sure, the Rays pitching staff is lights out against everyone else, but I think the box score speaks for itself.

John Lackey will take the mound against David Price in Game 2 on this afternoon. Price is a bit more imposing than Moore, but not unbeatable. He tossed a complete game against the Rangers but let up two runs on seven hits. The Sox will need the best of their mojo, though, against the 2012 Cy Young Award winner.

It’s playoff baseball, where anything can happen. The team with the best pitching imploded on itself in dramatic fashion, and now we're on to Game 2, where the Sox face a crucial chance to take a commanding 2-0 series lead and back the Rays into a corner.

Still, Tampa Bay has been in the proverbial 'corner' for the past week, winning games they have to win just to be where they are today. the situation makes for another dramatic setting at Fenway today.