Published on 18-Jul-2014 by Xavier McSpaniel 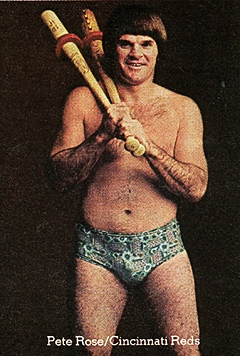 There was some awfully big news out of this year's All-Star tilt.

Not the Derek Jeter nut-hug-a-rama. Not the repeat of chicks diggin' Yoenis Cespedes' long balls. Not the Giancarlo Stanton shot that damaged the Mars rover. Not the clean-and-jerk Mike Trout did with the MVP award.

No, it was this: Bud Selig suggested there may be a role for Pete Rose to play in the 2015 ASG.

What sort of role? Here are our four suggestions:

Buster of Posey: You can't have Pete Rose at an All-Star Game and not have him end a catcher's career. Who would be the new Ray Fosse? May we suggest Buster Posey, only because he's been obliterated once already in a home-plate collision. And his name is tailor-made for wanton destruction headlines.

Anti-Chew Advocate: Rose could be the ultimate spokesperson for the current issue du jour in MLB. Who better to get the players off the tobacco and back on the booze and betting.

Derek Jeter Impersonator: In case the nut-hugging needs to spill over into a second year.

Chris Berman Hunter: Boomer should be the one trying to 'duck' a lifetime ban.