Blues Honor Stan the Man in a Uniform Way 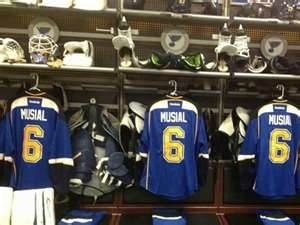 There's only one Man in St Louis, and his peaceful passing at the age of 92 brought the entire city -- and Cardinal Nation -- into a prolonged period of memories and mourning.

One of the more poignant tributes came during the first home game of the St Louis team currently in season, the Blues. During their pre-game skate, all players wore home jerseys adorned with Musial's retired Number 6 on the back with 'Musial' emblazoned on their nameplates. It drew one of the most rousing ovations any team will ever experience prior to a puck dropping.

The jerseys will now be auctioned for charity, with proceeds split between the Blues 14 Fund and Cardinals Care.

Musial, a first-ballot Hall of Famer, held 55 National League and/or MLB records when he retired in 1963. His 3630 career hits -- 1850 at home, 1850 on the road -- is surpassed in the NL only by Pete Rose. He is one of only three players ever to surpass 6000 total bases (6134). He won seven batting titles and was part of three World Series champions. Signed as a pitcher in 1936, he converting to a hitter after he hurt his arm and shot through the Cardinal farm system: Musial was the NL Rookie of the Year in 1941 and finished with a .331 career batting average. For modern-day geeks, check this stat: Musial led the NL in Wins Above Replacement (WAR) an incredible eight times, achieving an astounding 11.5 WAR in the 1948 season.

Musial remained a fixture in St Louis until the end of his days. His restaurant, Stan Musial and Biggie's, continues to be popular but was still the butt of his response as to how he made a million dollars in the restaurant business, "Easy. Start with two million!" He was always appearing around town, not as a celebrity but as a St Louisan who enjoyed his city as both a 'regular' guy and a family man. He never missed an opening day, and no player missed an opportunity to shake his hand.

Musial is surely the only player in any sport to be honored with two statues stationed at his sporting residence. They were the site of a public outpouring of expression as his funeral procession wound from cathedral to graveside. Among the trappings was a lone Anheuser-Busch Clydesdale, draped in red and riderless, a subtly fitting homage from one uniquely St Louis symbol to another.

On this day, the Blues were in Dallas. Defenseman Wade Redden, returning to the NHL after a two-year absence, notched his first goal in three seasons as part of a 4-3 Blues victory. Redden wears jersey Number 6.

On the day the Blues wore their special pre-skate jerseys, Redden did it again. He was back in fact. And in spirit, it seemed to be a sign that Stan the Man never left. 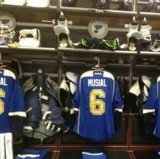 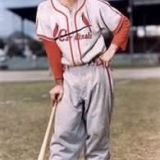