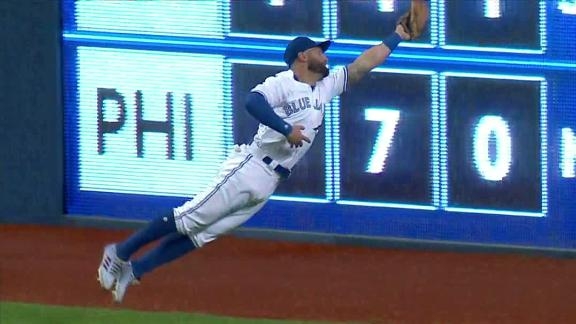 That's a perfect description for the way the Toronto Blue Jays' Kevin Pillar not only plays center field, but the entire range of meadow surrounding it.

Dude's a walking web gem, waiting to make the next moment of greatness happen.

Like last night in TO was one of them, with Boston's Mookie Betts thinking extra bases:

Maybe it was his catch of the year, or maybe his ivy-climbing feat in Wrigley was:

Prior to those, some were calling his skyward grab against Cleveland's José Ramírez the catch of the year:

Actually, dude's got this diving catch thing down to a science.

But wait for Catch No 1 in this montage. Pillar shows a bit of Batman to go with all the Superman efforts he's assembled in his career:

If Pat Jordan was still around today, he'd see that his words still ring true.