Blue Jays Back from the Dead? 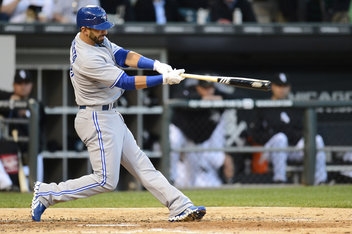 A week ago, the Toronto Blue Jays were scrounging around at the bottom of the AL East cellar, but today, they are one of the hottest teams in the MLB.

They've just tied the Rays for fourth place and are now just six games behind the Red Sox.

Toronto beat the Orioles, 4-2, on Saturday night as José Bautista broke a tie in the eighth inning with his 16th home run of the year. That put the Blue Jays at 10 wins in a row as they cruised on to a 14-4 record this month.

It’s hard to point a finger at what the Blue Jays have been doing differently of late, but the simplest way to put it is that they have been playing a much better brand of baseball. While they disappointed many earlier this season, TO is finally starting to play like the team everyone envisioned once the roster was written down on paper.

The biggest factors, though, have been the bullpen and the bats. While the starting rotation has been a disappointment this year (cough, RA Dickey, cough), the bullpen has excelled over the past month, tossing 58.1 innings while averaging a mere 1.4 runs per game. That’s electric stuff and has been key to holding opponents in the later innings, giving the Blue Jays a chance to surge ahead, as they did Saturday night.

Sluggers José Bautista and Edwin Encarnacion have been mashing, hitting a combined 36 home runs with 98 RBI’s. The modern day 'bash brothers,' these two dudes have been key to the Blue Jays' offense as they had been expected to be all along.

While the Toronto's current record of 37-36 is hardly something to be proud of, and the fact that they are over .500 for the first time this season just goes to show how much they have underperformed, it is a great feat considering where they started.

It seems the Blue Jays are back from the dead and ready to play in the AL East. This certainly will make the pennant race more interesting as all five teams are now in varying degrees of  actual contention.