Published on 3-May-2013 by Tyler Scionti 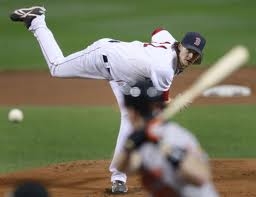 While the Red Sox steamrolled through Toronto en route to a series win, the Blue Jays played the part of sore loser claiming that Sox pitchers are cheating.

To say that the Blue Jays have been a disappointment thus far in 2013 is a vast understatement. This team has been the biggest band of underachievers since the 2012 Red Sox. That said, it’s understandable that they would be upset, but to make accusations that the Sox pitchers are doctoring the baseball? What’s next, that Mike Napoli is corking his bat?

The technical term for Clay Buchholz’s performance this year is “stupid good.” Buchholz always had the stuff, but never at the right time. He’s had confidence issues and injuries over the years, but so far in 2013, he has reached his full potential, and oh, what a ceiling he has! Buchholz is 6-0 so far on the season with a 1.01 ERA and a downright nasty 47 K’s in 44.2 innings. He always showed glimpses of this, but could it be that he has been doctoring the baseball as the Blue Jays claim?

Teammate Jon Lester does not think so. According to him, pitchers in this age don't know how to utilize the advantage of a doctored ball, especially considering how unpredictable a spitball can be. Consideirng that Buchholz has had pinpoint accuracy with his fastball this season, I don't think it is likely that he's hocking anything up on his pitches.

Maybe Buchholz has been too good so far in 2013, but Sox personality Dennis Eckersley is appalled at the notion that he could be cheating. Eckersley got ugly on NESN alongside Tom Carron, lashing out at Buchholz’s accusers, calling one a “career minor leaguer” and another “clueless.” The gloves are off between the two rivals so far in 2013; between manager John Farrell skipping town and the absolute beatdown the Sox have given the Jays so far this season, there is a surfeit of bad blood between the two.

Still, the Jays need to learn to move on and carry themselves professionally and with maturity. Baseball is a game of streaks and slumps. Their bad fortune will pass, and who knows? It may shift over to the Sox before the season's end. But to be so mad about losing as to accuse the other team of cheating, though, that’s going too far.