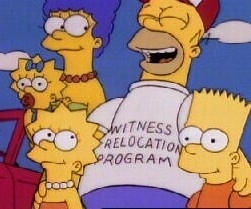 His brother's gone west, and his stats have gone south.

So maybe Melvin Emanuel Upton Jr felt it was time for him to make a change, too.

The way his stint with the Braves has gone, he's due for a witness protection program T-shirt, anyway. Assuming, of course, he could keep that straight.

There was a time when Upton was truly Bossman Jr:

Upton's far from the first player to opt for a different version of his given name:

In a way, even Willie Mays went by different names. The press dubbed him the Say Hey Kid, but ballplayers called him Buck.

No doubt, Upton inked his five year, $72million deal with Atlanta as Melvin. And at this stage, the Braves don't really care what he calls himself. They want to call him anything but a bust so they don't have to go out and sign a Zolio or a Todd to cover for him while putting up similar stats for much less dosh.

He'd better get that hitch sorted or Braves Nation will be calling him a lot of things much more creative than Melvin.