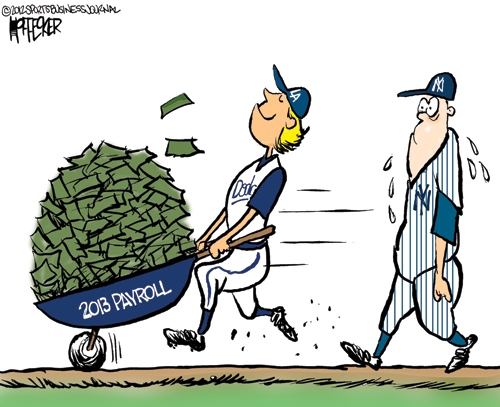 This was supposed to be the perfect summer in Los Angeles as the Dodgers and Angels both spent lotsa dosh and were favorites to win their respective divisions.

Add pennants to happiness as something money can't always buy.

The Dodgers spent $21million on Zack Greinke to go along with Adrian Gonzalez, Matt Kemp, and Carl Crawford as over $20million-per-year Bums. At 27-36 as of today, however, nothing has gone right for Los Angeles; they're in last place, 7½ games out of first place. The Dodgers actually have $91million worth of salary sitting on the disabled list, which has to be driving manager Don Mattingly crazy.

Down the road in Mouse Country, the Angels signed Albert Pujols last year and added Josh Hamilton this season; this dollar-gobbling duo collects $16million and $17.4million dollars respectively this season. Add to that Jered Weaver's $16.2million and CJ Wilson's $11.5million and a record of 27-37 as of today was not what owner Arte Moreno expected. Manager Mike Soscia has gotten nothing out of Hamilton all year and Pujols is batting 80 points below his career average.

Another last-place team that had higher expectations is the Toronto Blue Jays. Toronto made a big trade with Miami, bringing in Josh Johnson, Mark Buehrie, and Jose Reyes -- and later added RA Dickey and Melky Cabrera -- and were projected to contend in the AL East. It has not happened yet as the Blue Jays are 27-36 as of today and trail everyone in the division.

Maybe these clubs should take a lesson from the Boston Red Sox, who learned the hard way and may have finally gotten it right.

After an historic meltdown in 2011 and becoming the laughingstock of baseball in 2012, Boston signed good 'clubhouse guys' in the offsesaon and have jumped out to a 40-25 record as of today and lead the AL East. Gone are Josh Beckett, Crawford, and Gonzalez, and now the Red Sox are gettng contributions from newcomers Shane Victorino, Jonny Gomes, Mike Napoli, and Ryan Dempster, all players not even thought of in the same breath as Pujols, Hamilton, Reyes, etc.

Maybe that is the way to go, instead of spending hundreds of millions and getting nothing in return.