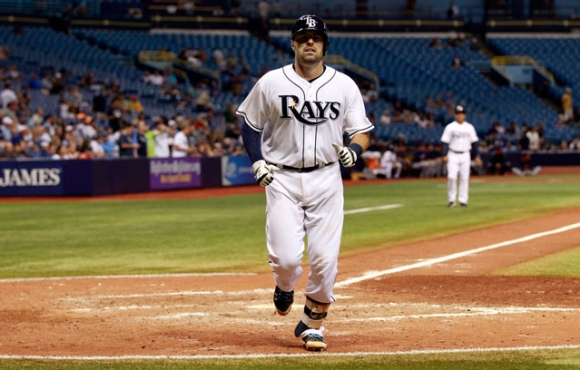 Baseball is supposed to be the safest of all professional sports.

And there is the occasional ugly collision.

But there's no tackling, checking, boarding, or even tripping.

Here's looking at you, Jalen Rose.

Really, if 42-year-old, 265lbs Bartolo Colón can play the game, how dangerous could it be?

However, more than any other jocks, baseball seem to be very susceptible to strange injuries.

These foibles aren't just limited to off- field oddities. Even in the heat of competition, ball players have found creative ways to do themselves. Case in point: Rays catcher Curt Casali.

Down 10-6 in the bottom of the fifth inning, Casali strode to the plate with heroic intentions. On the first pitch, dude accomplished his mission, sending one over the short left field wall.

Casali got into his home run trot but hit a snag rounding first base. Strained hamstring:

Being the professional that he is, dude was able to complete his journey around the bases, even if it was at the pace of your average snail.

Casali isn't the first major leaguer to injure himself on a home run. The most recent example is former Angel Kendrys Morales, who broke his leg celebrating a walk-off grand slam.

Unlike Morales, who missed the better part of two seasons with his weird wound, Casali may be able to return to action next month.

Maybe Casali and the rest of the league should take a hint from David Ortiz book of slow home run trots, lest their name be added to MLB's Hall of Bizarre Injuries.