Betting Tips for the Stretch Run 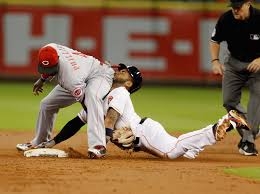 Now that you've digested the All-Star festivities, it's time to focus our betting attention on the unofficial second half of the Major League Baseball season that begins on Friday with a full slate of action.

And for those of you who play the bases regularly, I've thrown out a few words from the wise -- although I use the word wise loosely -- you can use down the stretch run.

First of all, let's pick a couple of sleeper teams to play the rest of the way.

In the National League, I like Pittsburgh. I think the Pirates started to get it together late in the first half and will continue to make a strong run the rest of the way. The Buccos and their fans made magic last season:

And they seemed to get a boost from the promotion of outfielder Gregory Polanco from the minors several weeks ago. It's been noticed:

As he continues to develop, the Pirates will continue to be a force in the NL Central. Their bullpen scares me a little -- eg- last Friday, when they blew a 3-run lead and cost me some dough against the Reds -- but I still think you'll normally get Pittsburgh at a good price, and they'll win enough to be a profitable selection.

From the American League, I am actually going with Houston.

Now before you ask, Houston, do you have a problem?, remember that baseball betting is about value. Just take a look at the numbers in the Bovada data tool on our Home page.

While the Astros were16 games below .500 prior to the All-Star break, they only lost just over $200 for $100 bettors and ended up being a profitable bet on the road. The reason for this is they won plenty of times as a significant underdog, and that's the kind of team you want to bet on to wind up in black numbers with your bookie.

Look for this young team with a few rising stars to continue to play hard and win more games, and don't be afraid to pull the trigger on the 'Stros as substantial underdogs. For example, take a look at their game tonight:

Here are two excerpts from the Bovada data tool: Trust me, this tool can be a valuable resource!

Next, don't be afraid to play the under.

The game is being dominated by pitching right now, and batting averages haven't been this low since before most MLB players were alive. Strikeouts are also at an all-time high. Under plays seem to be an especially safe bet when teams from the NL West meet up (except when the Rockies are at home).

Finally, this is a common trap that many casual bettors fall into and I want to be clear:

For example, if San Francisco is playing the Padres -- a club nowhere near the hunt -- don't simply base a bet on the Giants because they need it more. Even the worst teams are still made up of professionals and are playing hard; almost always, anyway.

Remember, those players have jobs to protect. But more than anything, they are professionals. And if they're well out of the race, they aren't going to lay down. Many of them look at playing contenders as some competitive spice to an otherwise lost season. They get up for those games as much as the contenders so.

You've also heard of the term spolier? That's why.

Thus, if you want to play a contender based on match-ups and trends, that's fine; that's what the experts do. But don't base it on a team's perceived 'desire' to win more than another.

So there you go. These are a few tips thathopefully will help you along the reat of the way - or at least for the next couple of weeks, when plenty will quit betting baseball all together because football season will be here.