Ben and Brad Pair Up to Each Pop a Pair 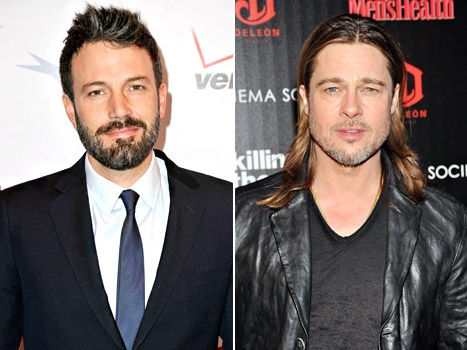 No, this is not a debate about which Hollywood hunk is hunkier, Ben Affleck or Brad Pitt.

But some ladies might prefer to swap out Brad Cooper for Brad Pitt much like a fantasy baseball owner would drop a third catcher for a Padres pitcher who happens to have two starts that week.

Tuesday night, both players were hitting leadoff for their respective teams and accomplished a feat that had only happened twice in MLB history.

Both players hit two homers in the game, and Miller almost powered a third in the eighth inning. All that worked out quite well for my fantasy baseball team since I have both players!

This may not seem like a big deal, but anytime an event has only occurred on two other occasions in baseball history, it’s a big deal!  Here are the others:

Based upon statistical trends, expect this to happen in another 20-25 years, when a fiber bars are considered PED’s.

For one night, Ben and Brad were the stars of the show and had a common connection other than Gwyneth Paltrow! Wait, we're still talking about baseball, here!

If they would’ve been both playing the same position, that would've truly spiked cool-o-meter, but Zobrist apparently can only play 2B for the Rays when they face the Mariners.

And rest assured that the next time an obscure baseball feat happens -- they're called the 'red-headed stepchild' of data -- rest assured the Elias Sports Bureau will know within seconds the last time it occurred, who the players or teams involved, the date, and even how many hot dogs were sold at the game!

And whether one dude was in the crowd watching a game where the player with whom he'll be linked is getting his career underway.