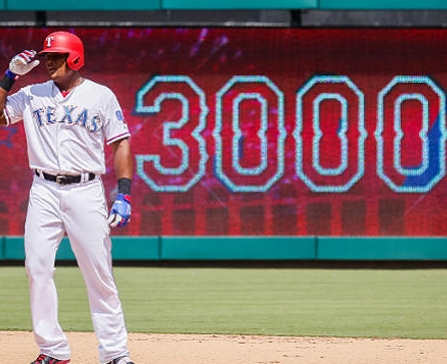 With a sellout crowd in attendance at Arlington, absolutely no one was gonna argue where Adrián Beltré stood when he was on deck.

Joined by virtually anyone near a TV screen in the Dominican Republic, especially, those fans in the stands got what they came to see and celebrate.

Namely, the 38-year-old Beltré notching the 3000th hit of his career:

Beltré thus joined only two other third-basemen -- Wade Boggs and George Brett -- in the club.

That's no surprise, really, as 3B is usually a power-hitting position. Worthy dudes like Mike Schmidt and Brooks Robinson did their share of it while serving at human vacuum cleaners in the hot corner.

But as slick as they were with the leather, it's doubtful either would've speared Beltré's scorcher down the third-base line.

During his stints with the Dodgers, Mariners, Red Sox, and Rangers, Beltré's definitely racked up a number of notable achievements on the way. Here are but a few:

Through the magic of electronics, former teammate Ivan Rodríguez made a cameo appearance right after concluding his induction speech in Cooperstown.

Most notably, Beltré has become the first Dominican player to accomplish this feat.

For a nation that's put so many in the majors and that virtually considers baseball as a second religion, it'll be surprising if they don't declare this a national holiday.

As for the Rangers, that'll probably be the high point of their season. They're going nowhere after September except the golf course.

So, it's now time to move on to other things.