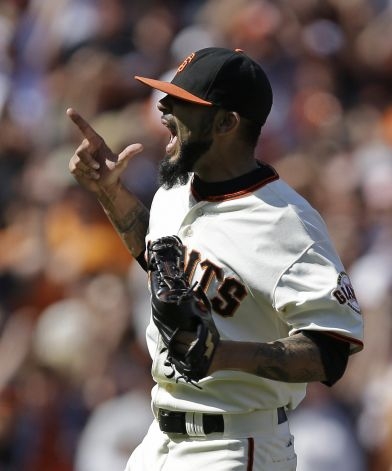 The baseball season is far enough along to discern a definite trend developing.

So definitive is this movement that I herewith give it a name.

The San Francisco Giants' Orange & Black Machine is virtually unstoppable. Powered by the Killer P's, a Panda, Pence, Posey, Pagan, their twenty-first century ultra-encrypted Morse code, and so much Moore. The Giants are finally living up to their name again. As a baseball fan who is often engaged in daydream scenarios, it's a wonderful season when everything is clicking on all cylinders and when his unstoppable team quells all opposition in its path, leaving naught but a wake of destruction and disarray in the shape of bitter disillusionment and despair for the poor schmoes of what may be deridingly termed the opposition.

While the shallow media types were blinded with stars in their eyes -- and at every position -- by the Dodgers' huge payroll, the brain trust of Brian Sabean and Bruce Bochy quietly went about fine tuning the machine that worked for them two seasons ago.

Looks like it's working, while the Bums' Yankee-style spending binge is wanting by comparison.