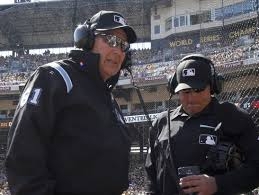 Only one sport truly has instant replay right.

And that's for one simple reason. The only reviewable plays are goals. Did the puck cross the line or didn't it?

Baseball is starting to realize the luxury of simplicity. And in so doing, it has returned its catch-and-transfer rule back to its original interpretation, effective immediately.

Now, mockeries of logic like this won't happen anymore as a result of replay:

At least, if they do happen, the human error won't take as long to embarrass itself.

The concept of instant replay is sound. However, in North American team sports, it must still be administered by humans, and that's the problem. Judgment is still present, and as the march of technology further refines the details of what's viewed, judgment ironically becomes increasingly nebulous.

For example, when is a 'football play' -- the measure of a possession in that sport -- truly completed? Finer detail blurs the actual starting point and/or ending point. Replay officials need more time. Fans wait. And wait. And as is often seen, the decision is still wrong, for whatever human rationalization.

As if this point actually needs an example, here's one. Replay officials upheld an obviously poor call that was crucial in Iowa State's loss to Texas last season.

Baseball has had enough of ridiculous arguments based on nebulous determinations. Football and basketball should do fans a favor and follow suit by simplifying their systems.