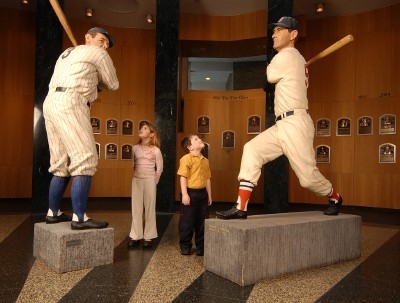 Baseball fans know why the game's Hall of Fame is located in Cooperstown, a sleepy little village in upstate New York.

That's where, the story goes, Abner Doubleday created the the game and its rules. However, that's exactly what it is. A story.

But why let facts get in the way? Cooperstown does great business as the home of baseball's hallowed ground. Ironically, it does relatively little with its museum honoring one of America's most famous authors, who actually did have a factual history there. That's because one is the centerpiece of a culturally ingrained marketing machine, and the other is simply a cultural designation.

Since 1936, the Baseball Hall of Fame has promoted the game and its kajillion-dollar industry by anointing its designated legends. It empowered the Baseball Writers of Association of America to do the honors, and that group holds its task as holy.

Unfortunately, the BBWA's mandate has as much credibility as the Doubleday/Cooperstown myth.

The recent results of this year's Hall of Fame vote provides a classic argument for this. Let one of the leading voices calling for sanity in sports explain why:

Dan LeBatard, a columnist for the Miami Herald, made headlines as the rogue voter who allowed the readers of Deadspin to complete his ballot. For this, the BBWA has cast him from its scribely ranks. And for this, legions of true baseball fans owe him a debt of gratitude.

Many of the 600-plus BBWA voters have as much relevance to the game as blacksmiths do to auto repair. New methods of analysis and comparison have given the most statistically quantifiable of sports ever sharper tools upon which to make informed decisions. But these are largely ignored by the old school in favor of crusty opinions and relative morés.

Back in Ruth's day, sportswriters kept his carousing quiet so as to keep in his favor. In future eras, sportswriters would nod and wink when future Hall of Fame pitchers would load up baseballs. They'd be in clubhouses where the spread would have two pots of coffee, regular and -- wink wink -- de-caf, ie- amphetamine-spiked. None of them ever made much of a deal out of it.

And these are the dudes who now pass judgment on players as a whole whose careers occurred in the so-called Steroid Era after giving a free pass to those who partook of other sins in the past?

Hopefully, LeBatard's public service will be an agent for change. Given baseball's pace of change, that means we might see something of substance being implemented by mid-century.