Baseball Gets Its First Optical Illusion Since the Gyroball 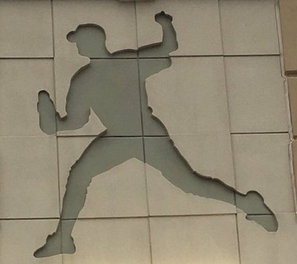 Perspective is an amazing thing.

In music, it literally gave us The Doors.

It's crucial in the sporting world, as well as somewhat of a mystery.

Then, there's the ongoing discussion of whether a curve ball actually does or whether it's just an optical illusion capitalizing on a player's perspective.

Representing the other side of this argument, here's the video evidence that's diametrically opposed to the previous video evidence:

Maybe MC Escher has a point ...

When Daisuke Matsuzaka showed up with the mythical gyroball, both sides ramped up their positions.

Dan Uggla, for one, was quite clear on his perspective: reality bites.

Now, a new challenge to perspective has arisen, albeit on a lesser scale.

Consider it to be the blue dress discourse of baseball.

Someone strolling in Crocker Park outside Cleveland noticed this image and wondered:

So, is this a view from behind a right-handed slinger or from the front of a southpaw?

Or is it a random tribute to switch-pitcher Pat Venditte?

Someone took artistic license to the ultimate.

If only this Escher wannabe left a clue or two, like dressing the image up in a blue or gold uniform and having it throwing a gyroball.