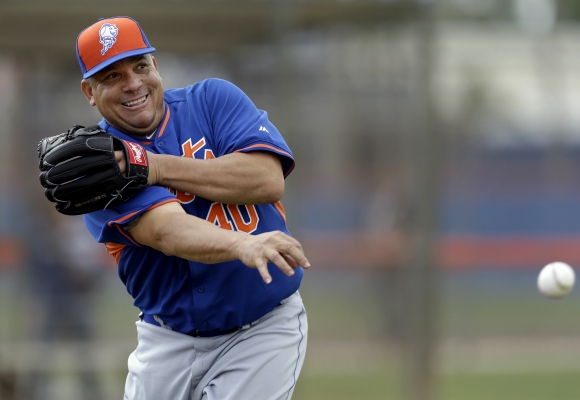 There's a veritable plethora of young and talented players in the MLB today.

Dudes like Bryce Harper and Mike Trout are undoubtedly going to be breaking scores of records before their careers are done.

However, the spotlight here shines on a much older and more robust man. One who's quite possibly the most entertaining figure in the game, if not professional sports: Bartolo Colón.

This stout Domincan may not fit your typical definition of what an athlete should look like. At 42, dude's whopping 5-11 frame supports a listed weight of 285lbs. Many a critic would love to strike down Colón as being unathletic, but anybody who says that has never seen him perform.

Unlike the rest of the Mets' fireballing staff, Colón won't blow anybody away with his heater, but the dude has near pinpoint accuracy, best illustrated by his league leading 1.11 BBs per nine innings. He's also a master at fielding the ball. Feast your eyes:

Then there's the time he picked off an opponent by outrunning him:

Of course, when the topic's about Big Sexy here, the conversation must include his skills at the plate.

Determined to shut lips, Colón put in the work and now takes his plate appearances mega-seriously. Dude actually rang up eight hits this season, posting four RBI’s along the way. That's much better than Jon Lester can ever say.

Fortunately for entertainment seekers, Colón has no plans to retire in 2016. He'll be returning to the Mets, where he'll do his portly best to help the the club return to the World Series.

This will likely require more Bartolo starts in the upcoming season, as well as logging a few relief stints during the dog days and possibly the playoffs. Again.

Ultimately, the sad day will come when he hangs up his spikes for good, but thankfully, that day's not here yet.

Here’s hoping Colón blows away the competition and creates more memorable moments along the way.