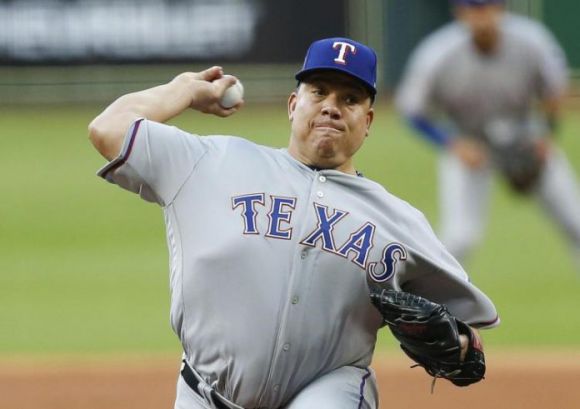 Bartolo Colón is a miracle.

The MLB vagabond -- dude's turning 45 in May -- almost became the oldest player to hurl a perfect game or no-hitter.

Almost, but not quite.

The Houston Astros, completely perplexed for the majority of the night, finally broke through with a walk and a double to start the 8th inning.

Big Sexy was pulled after allowing a sacrifice fly that tied the game, but he didn't let that spoil the fun.

The former NL slugger was even joking around with Josh Reddick -- the dude who broke up his no-no -- as he was leaving the field to a richly deserved ovation.

The Rangers did eventually win the game, 3-1 in 10 innings, so karma does still exist.

Here's a little fun fact for you to ponder:

In case you're wondering, the oldest player to toss a no-hitter was Nolan Ryan, who was also 44 years old but a bit younger than Colón.

As far as perfection goes, that would be Randy Johnson at 40 years old.

It may be selfish, but here's hoping the ageless wonder can give us another 21 seasons.