Bartolo Colón Is Living the Dream 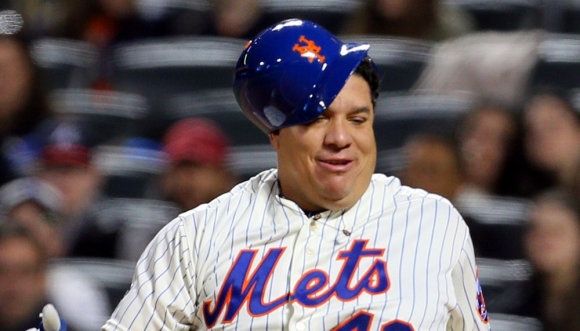 Action around the diamonds last night featured a victory for the plight of out-of-shape and middle-aged men everywhere.

No, not the introduction of that combination pizza-hotdog that the Fresno Grizzlies -- the 'Stros AAA team -- started selling this season.

Sure, the official scorer later ruled the 'hit' an error. Dude's a soul-less geek. But who cares? If a 285-pound bundle of ovoid athleticism can safely rumble to first base, he deserves to get a hit.

Do know, though, that Colón does have an official hit this season, which came on Sun 12 April against the surely-mortified Atlanta Braves:

Colón’s 'hit' last night would prove to be utterly meaningless, as the Mets went on to lose the game to the St. Louis Cardinals, 9-0. However, this shouldn't diminish the miracle that happened on a cold night at Citi Field.

The Round Mound of the Mound has been an ace for the Mets this season, putting together a 6-3 record and an outstanding 46:3 strikeout-to-walk ratio. Even more amazing is that Colón, since signing a two-year, $20million deal with the Mets, has been able to rack up three hits and two RBIs, both of which have come this season.

Some may try to cut down ol' Bartolo for being so out of shape, but that's not happening in this corner of cyberspace. Sure, he's on the heavier side, but that clearly doesn't prevent him from achieving his dream of playing major league baseball.

Think of it this way: the portly Dominican represents the best qualities that humanity has to offer: a never-give-up attitude and an unyielding sense of determination. So the next time somebody claims that you can’t do something, that you aren’t good enough to accomplish your goals, just remember that if Bartolo Colón can get an infield hit, anything is possible.

So jiggle on, Bartolo. You’re an inspiration to us all.