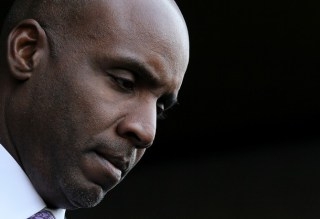 Baseball’s favorite son, Barry Bonds, is back in the news again.

Except this time, he's going on the offensive.

On Mon 11 May, Jon Heyman broke the news that Bonds plans to file a grievance against Major League Baseball for colluding to keep him out the league.

In 2007, at the age of 42, Bonds broke Henry Aaron’s home run record when he sent one high and deep into the San Francisco night. For those who wish to relive that night, I've included a video of that glorious historic event in MLB history.

Many a record breaker has limped towards history, but Barry was no Stan Ross -- RIP, Bernie Mac -- as even at a ripe old age, Barry was still a force to be reckoned with. Pitchers feared the man, as shown by the fact that Bonds was walked 132 times in 2007. Putting that in perspective, José Bautista and Joey Votto are the only players since then to have matched or exceeded that many walks in a single season.

Barry was also no slouch at swinging the bat, as he slugged 28 bombs and had a more-than-respectable batting average of .276 that season. Many will claim his success was due to his “accidental” steroid use, but theres no baseball fan who can deny the fact that Barry Bonds could hit a baseball.

Bonds filed for free agency in 2008, in pursuit of the one prize that had alluded him throughout his career: a World Series trophy. His agent was quoted as saying that his client was "anticipating widespread interest from every Major League team." But as the off-season progressed, it seemed less and less likely that the league’s all-time home run champ would find a home.

Bonds refused to give up hope, vowing not to retire in the face of such adversity. Still, aside from an occasional rumor mill report, Bonds remained trapped in the proverbial bullpen.

However, although his playing days may be over, Bonds is far from finished. Fresh from his recent victory of appealing his obstruction of justice conviction, he now plans to file a grievance claiming that the 30 MLB teams conspired to keep him out of the league.

This will be tough for Bonds to prove, as he'll have to find some sort of evidence to collaborate his claim. Unfortunately for him, anything short of finding a signed agreement in a landfill or getting an MLB GM to admit to some secret Illuminati-type meeting within the bowels of Bud Selig’s house will he be able to prove his story.

Bonds may not be able to win his grievance case, but I, for one, think the dude got boned by baseball.

I'm not a Barry Bonds fan by any means. In fact, any time he played the Mets, I secretly wished somebody would throw a fastball that would knock him flat on his butt. With that being said, I would've loved to have had him on the Mets. In 2008, while Barry was sitting at home, the Mets were trotting out an outfield that had such names as Nick Evans, Trot Nixon, and an old and broken Moises Alou.

The Mets are just one example of a team that could've used Bond’s services in 2008, when any number of teams would've been improved by having Barry on their squad.

The question must then be asked as to why Bonds was blackballed from baseball.

MLB teams defend themselves by portraying Bonds as an old and overweight player who carried too much 'baggage' for them to take the risk, even though Bonds was reportedly willing to accept a deal for the league minimum. OK, it is true that Barry carried that burden, but what makes his case different than any other troubled player?

Why are teams willing to take risks on other steroid guys? A prime example of this would be the Mets' signing of Gary Sheffield. He was named in the infamous Mitchell Report, and they inked him for the league minimum?

What makes Bonds more of a risk than actual criminals such as Delmon Young? Dude was signed by the Phillies after his pleading guilty to an aggravated harassment charge.

Why does MLB find it necessary to clean Barry Bond's closet when their own teams can't keep their own closets clean?

I’m not saying that you have to like Barry Bonds. I’m not even saying you have to accept him as the 'true' home run king. All I'm saying is that the man was unjustly denied the opportunity to continue playing the game.

While I won't go so far as to say that MLB actively colluded against Barry Bonds, I can tell you that I think he got a pretty raw deal.

Even If he finds a way to win his grievance, Bonds will never set foot on an MLB diamond again. Did he deserve to be blackballed for cheating? Maybe yes; maybe no. All I am saying is that, to me, Barry got boned.

At least Barry is looking good these days. I wonder how he lost all that weight?