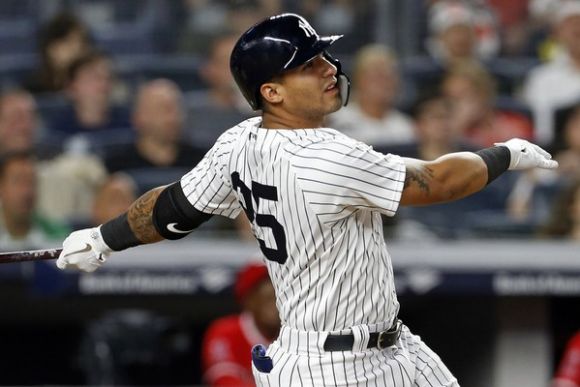 With the Memorial Day weekend in full swing -- as it were -- the New York Yankees provided some of their fans with a new sorta sobriety test.

Surely a good number of them checked online through the morning fog -- as it were -- and may have been shocked to see the Bombers had sent a Torreyes back to the Minors.

As if that wasn't enough to spur a reach for the rollmops ...

... maybe a closer look at the spelling would.

Gleyber Torres is still with the big club, and he's still raking.

The count at this moment is five home runs in four games. Let us count the ways:

That last round-tripper clinced a 2-1 victory and was done in full view of Shohei Otani, who knows a thing or two about rubbing elbows with Babe Ruth's ghost.

The Sultan of Swat, though, never launched four bombs in four days. He did other stuff instead.

Like amaze onlookers that his swing could do the damage it did. However, it does seem like his hips fired before his hands did, and that's huge to this and any day.

No one sane is mentioning the 21-year-old Venezuelan in legendary terms, of course, but dude's picking up where he left off on his way up the farm club ladder.

And remember, dude came to New York from the Cubbies in a rental trade for Aroldis Chapman.

Maybe so, but he's leaving his mark in the power department.

Like when he won a game for the Yankees with a three-run tiebreaker against Cleveland.

What matters is the Yankees were 9-9 when Torres was called up. Since then, they're 23-6.

That's the sorta record that really makes a difference.