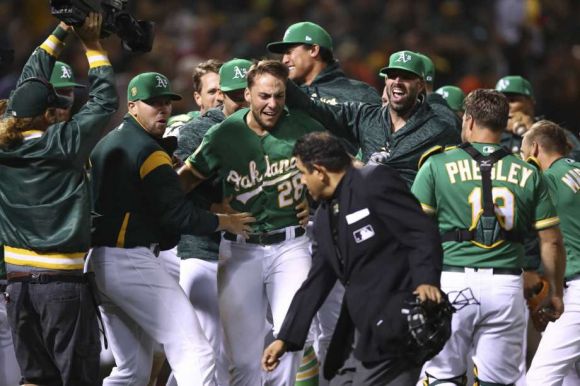 With apologies to the late Yogi Berra, it's 2002 all over again.

Back then, players no one took seriously turned into a buncha Moneyball lab rats who caught fire in August and wedged their way into the post-season.

As far as the sporting public at large knows, dudes could be interchangeable with the lineup for those anonymous St Louis Wolves:

After waking up the baseball public by sweeping the Astros in Houston before the All-Star break, the A's have become one of the game's prime stories. Dudes are on a 39-13 tear after last night's 10th-inning, 4-3 walkoff comeback against the 'Stros in Oakland.

The A's are turning that sorta ending into a trademark.

The fireworks in this one launched in the bottom of the ninth.

The A's were down 3-2, speedy newcomer -- a former Astro prospect, incidentally -- Ramone Laureano pinch-running at first base, and Nick Martini at the plate.

What happened next was a blur:

One thing Olson's never done, though, is be the dude who walked one off.

As if there was any doubt coming into this series, the AL West is a two-team race.

It may yet be a three-way, but the Seattle Mariners have a few wrinkles to iron out.

On Sat 16 Jun, the Athletics were 11½ games behind Houston. A lot's gone on in the past two months.

The 'Stros' defense of their World Series title is getting dramatic much earlier than they thought it might.