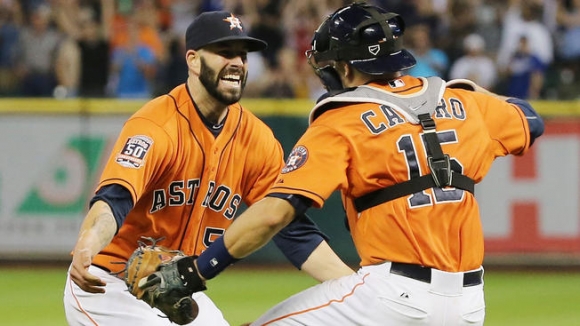 The last time Mike Fiers was in the national spotlight, it was for breaking Giancarlo Stanton's face.

But there he and his 88mph heater are again tonight, and this time they're basking in it.

That's because not only did the Houston Astros' right-hander not hit anyone, no one hit him.

And to think Fiers was sorta the Silent Bob in the trade-deadline deal that caught fire when the Carlos Gomez-for-Tearful Wilmer trade fell through.

But now it seems like the aftermath has worked out for everyone.

Flores is one smilin' little shortsop on the Amazin's, the Brews picked up a four-stack of blue-chippers from the 'Stros, and now Houston got what they wanted out of the swap, which was a solid mid-rotation starter who could shore it up now.

'Stros GM Jeff Luhnow's geek tweaks must include some of the same algorithms as the Steamer Projections, where Fiers was tagged as a 2015 sleeper candidate as a Fantasy Value above Replacement must-have.

Along with another trade acquisition, July's AL Pitcher of the Month Scott Kazmir, Fiers has made Luhnow's star shine even brighter. Not only has his home-grown approach come up trumps, but now he's filling immediate needs and getting instant returns.

With the ascension of Texas, the AL West is a three-team sprint to the finish now. Fiers dramatics tonight may only be one game, but they've added an exclamation point to the statement Houston's making that they've arrived, they're here to stay, and they're in it to win it.