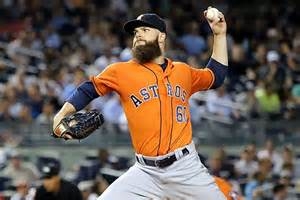 It wasn’t all that long ago when the Houston Astros were the laughingstock of baseball.

The team had just completed their sixth consecutive sub-.500 season.

Manager Bo Porter was canned in the season’s final month.

Not much was going good for the 'Stros.

Well, besides the breakout debut of outfielder George Springer.

To the casual fan, Houston didn’t seem like they’d be any good any time soon.

It’s not like they had any big names that would attract any outside attention.

That’s why it was a surprise to most to see Sports Illustrated name the Houston Astros next to the phrase Your 2017 World Series Champs.

Sure, Springer hit well enough. Starting pitcher Collin McHugh was good enough to finish fourth on that Rookie of the Year ballot. Even José Altuve was starting to become a household name. But were these guys World Series worthy?

2015 sure made it seem so. Or at the very least, they made the playoffs.

The debut of shortstop -- and another Rookie of the Year winner -- Carlos Correa and the Cy Young performance of Dallas Keuchel propelled the Astros to their first post-season appearance since 2005.

Unfortunately, Houston ran into the eventual World Series champion Royals and their comeback machine. Still, 2015 marked the coming out party for the Astros.

2016, however, saw Houston take an immediate step back. Besides Altuve, Springer, and Correa, the rest of the

'Stros' key pieces fell short. Keuchel and Doug Fister pitched nowhere near like the aces they were supposed to be.

Slugger Carlos Gómez hit so poorly that he was cut before season’s end. Ironically enough, he would find his swing with the Rangers.

The club would finish above .500, but that was short of the World Series expectations the club had set for themselves.

Going into 2017, the Astros don’t seem to be taking any chances of another disappointing season.

It's not even a month into off-season, and the team has already acquired seven-time All-Star catcher Brian McCann and outfielder Josh Reddick.

McCann had another strong year with the Yankees in 2016, but the emergence of Gary Sànchez made McCann an expensive luxury to the Bronx Bombers. Still, in trading for him, the Houston will get a perenniall 20-bomb candidate with a reputation as a good defender.

Reddick had a good 2016, but most of that came in the early part of the sesaon. Looking beyond that, dude will be a nice addition to the Astros outfield.

He'll most likely be forced to play LF since Springer will be the club's RF for the foreseeable future.

There remain lingering reports that the 'Stros are looking to bring former playoff hero Carlos Beltrán back to where his career began. This may be a challenge, as it’s hard to imagine the historically stingy Astros outbidding the Yankees and Red Sox.

Regardless, Houston appears to be on the inside track in 2017.

With a lineup sporting Altuve, Correa, Springer, Reddick -- as well as Cuban signee Yulieski Gurriel and rookie Alex Bregman -- the Astros look to be contender in 2017.

Will the SI cover prove to a crystal ball in disguise or just a tagline to sell magazines?

It'll be a story line next season, apparently.