Astros after the Blast-Off: Can They Maintain Orbit? 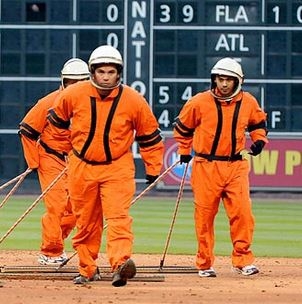 For a while there, it looked like the 'Stros had taken off.

They still may be. At 18-9, Houston's the best team in the American League.

Yes, the tail-dragging Texas Rangers snapped the Astros' league-best 10-game winning streak and then pinned another loss on them last night, but as we all know, the MLB season is a marathon and not a sprint.

So, for now, Jeff Luhnow's Frankenstein is looking like the best sprinter in the league. Literally. The club's 33 stolen bases lead the majors, thanks in part to this little sprinter:

Can the Astros keep up this pace? Bummer alert: History doesn't seem to be on their side.

Houston hasn't had a winning record since they went 86-75 in 2008. They have the fourth-longest drought in the league, having not made the playoffs since 2005, when they got swept by the White Sox in the World Series.

Through the first 26 games of that 2005 season, they had a record of just 11-15. Not too impressive. When you look at the names on the backs of the jerseys, though, this team doesn't look comprable in any way. And they still have a few holes in their game.

In 2005, the 'Stros had Roger Clemens, Andy Pettite, and Roy Oswalt at the top of their pitching rotation. All three finished with an ERA below 3.00. This year, they have a Big Three of Collin McHugh, Dallas Keuchel, and Scott Feldman.

Given that the 2005 trio was well-seasoned by then, which three would you choose?

It's a young club, so they might not have the biggest names, but these Astros can't be counted out, especially in a surprisingly open-ended division like the American League West.

Just take a look at last season. The Kansas City Royals were going off at 17:1 odds to make the World Series at the beginning of last year. Houston actually broke out of the gate at 8:1. Would you take them?

Well, just ask yourself this: What would Pete do?