Aroldis Chapman Gets Booed Off Mound after Ugly Ninth Inning 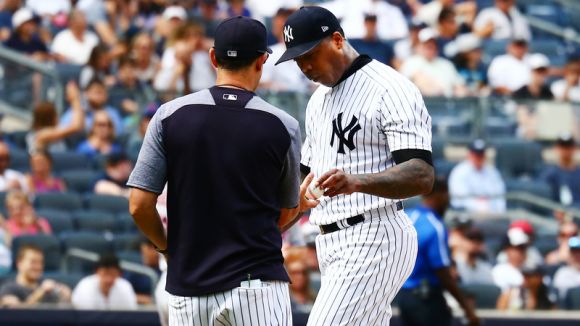 By all accounts, Aroldis Chapman is having a pretty darn good season.

The Yankees closer has notched 26 saves and even made the All-Star team, for what that's worth.

However, fans in the Bronx aren't remotely interested in any sort of statistical analysis.

Recently, the former Cubs mercenary entered a game against the crosstown Mets with a four-run cushion.

Chapman was asked to vacate the mound after allowing three walks and a hit while not recording an out.

Oh, and he also plunked a guy.

Yeah, not a good day at the baseball office.

While this is undeniably bad, the reaction from that surly group of alleged fans at Yankee Stadium was probably unnecessary.

Fortunately, someone named Chasen Shreve was able to finish the 7-6 Yankees win.

Beyond the indignity of being removed from a game in favor of someone named Chasen Shreve, dude also had to listen to those ungrateful bastards boo him into the dugout and through the tunnel.

The unfortunate outing ballooned Chapman's ERA to an astronomical 2.03, so he sucks something fierce.

Of course, this sort of thing is more or less par for the course in the Bronx.

Giancarlo Stanton can sing you a few bars of that tune.