Are the Nationals Done? 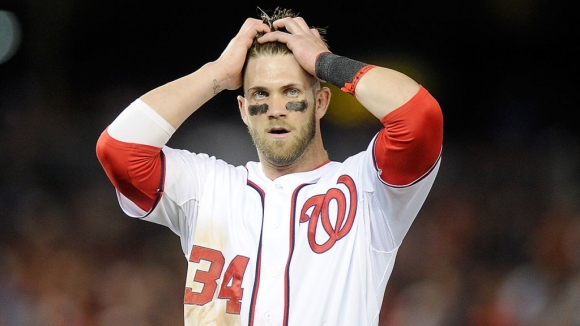 The Washington Nationals entered the year as heavy favorites to win the World Series.

The incumbent NL East champs added ex-Tigers ace Max Scherzer to their already stacked pitching rotation. They have arguably the best young player in baseball in Bryce Harper. They play in a division that sports the game's two worst teams.

What could possibly go wrong?

As was the case with certain financial institutions in this country, the Nats were deemed too big to fail.

After surviving a few early season injuries, it seemed like Washington would make good on the pundits' predictions. But these dudes have played like anything but a contender since the All-Star Break.

Their NL East lead over the second-place Mets collapsed over the course of a weekend series sweep.

Since the mid-summer break, the Nats have posted a 10-20 record, with their most recent 5-0 loss to the Giants pushing them below the .500 mark. For a team that was a lock to win their division, they sit a whopping 9½ games out of the second wild card spot.

Even with Harper in the lineup,Washington has posted a collective .232 batting average in August. Big Money Jason Werth is the worst offender, posting an abysmal .125 average and .200 on-base percentage. The pitching? Right. A 5.23 ERA in the month of August is, incredibly, sub-Phillies (4.70).

Underachievement ultimately leads to troubles in the clubhouse. That puts manager Matt Williams on Front Street, especially for his bullpen management.

With a little more than six weeks left in the season, there may enough time for the Nationals to recover.

Of course, there may also be enough time for the Washington Generals to re-form.