Are the Mets for Real? 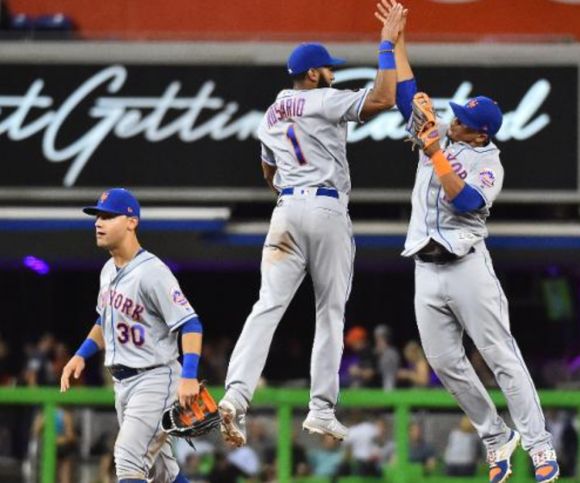 Despite the despicable weather, the first few weeks of the baseball season have found a handful of clubs breaking quickly from the gate.

The Mets? Without any gimmicks?

After taking two of three against Milwaukee over the weekend, the Amazin's now stand at an eye-popping 12-2, atop the NL East.

The series capper was sealed by none other than the fans' most beloved Met, Wilmer Flores, going deep with another of his patented walkoffs:

All this is happening with a rookie manager Mickey Calloway at the helm. Who knew?

Perhaps not even Sandy Alderson & Co in the front office.

They wanted a Sabremetrics geek who wouldn't go overboard like, say, the Phillies' Gabe Kapler.

The Mets' fortunes, more than most, are built around a solid starting rotation. So far, they've all stepped up -- Noah Syndergaard, Jarod deGrom, Matt Harvey, Zack Wheeler and Steven Matz  -- and their bullpen hasn't let those efforts go to waste. Dudes are 8-0 in games decided by two runs or less.

New York's offense has been boosted this season by the addition of veteran Adrián González, who's on a revenge tour after being discarded by the Dodgers.

If he can stay healthy for most of the season, he'll join Yoenis Céspedes and Jay Bruce as a potent engine room for power.

Once Céspedes gets well and truly untracked and Bruce heals, that is.

The NL East is allegedly Washington's to lose, and the Mets are gonna do their best to be the ones to make them lose it. April wins will look pretty good by the time those dog days of August roll around. Whether they'll be enough to hold off the inevitable Nats charge remains to be seen.