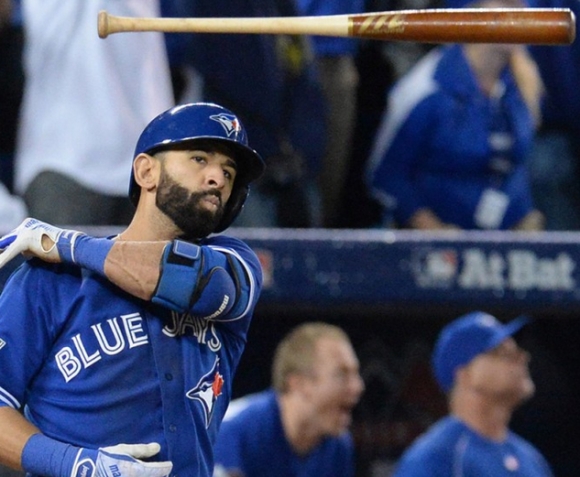 The 2017 Toronto Blue Jays season has been a bit of a disappointment.

The team finds itself below the .500 mark and living with mushrooms in the American League East's cellar.

After two back-to-back post-season appearances, the Jays might be booking tee times instead come October.

As such, TO's looking to move an expensive piece or two before the non-waiver trade deadline.

One such name in play is none other than José Bautista.

Joey Bats has been a major part of the Blue Jays' resurgence in recent years. While he's never hit for a great average, dude's been a big production player in his ten-year tenure there.

In the two-season period from 2010-11, Bautista socked 97 dingers and 227 RBI. Not too shabby for a dude who was basically thrown away by Pittsburgh.

Of course, you can’t talk about Joey Bats in a Blue Jays uniform without mentioning his famous go-ahead bat flip homer in Game 5 of the 2015 ALDS.

But windows of opportunity close at some point, and now Toronto could stand to move an asset or two in hopes for reloading for 2018.

The problem is Bautista's fallen from his former MVP-esque talent level.

2016 portended a sign of things to come when the right fielder struggled mightily in a contract year.

This season, dude's failed to even be a subpar 36-year-old player for the Jays. Currently posting a .227/.340/.402 slash line with 16 homers, he's looking like someone who'd better be making retirement plans.

There's also the fact that Bautista has a possible $17million mutual option on the table for next season.

Besides advanced age and big cash obligations, Bautista also has a no-trade protections via his 10-&-5 rights. So a dude with few bargaining chips has one that shouldn't really matter. He should be overjoyed if someone -- anyone actually made a deal for him.

Despite all these factors, the team's still gotten some interest from clubs around the league for Mr Bats.

If Bautista's on his way outta town, he can at least know he played a major part in ending a Toronto playoff drought spanning more than two decades.

Maybe a new fan group will come to love him and his bat flips.