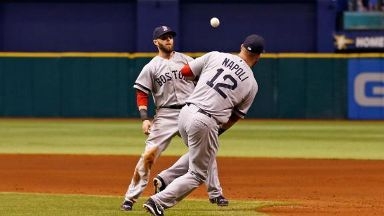 The Boston Red Sox they found ways to win in April, but in May, they seem to be finding new ways to lose.

The Sox went a sensational 18-8 in April to start the season, but in May has seen them register a downright ugly 5-9 record to date, with Tuesday night’s debacle versus the Rays the latest insult to the Boston media and fans prior to last night's victory.

Tuesday night’s game started well enough, David Ortiz unloaded for a three-run home run in the first inning and Lackey seemed to be cruising aside from a few small bumps in the road. Then came the fourth inning when the Rays surged forward to score five runs, giving them the lead for the rest of the game.

It wasn’t that Napoli and Pedroia looked like a pair of little leaguers on the dropped popup that somehow scored two runs, and it wasn’t the fact that the offense looked weaker than A-Rod’s excuses; it was the whole package that the 2013 Sox, much like the 2011 and 2012 Sox, are starting to look like they think showing up is all they have to do, that playing with their hearts on their sleeves is not a requirement for success.

Over the last week, the Sox have collectively hit .237 alongside a pathetic .312 OBP. In April, the pitching staff had an ERA of 3.58, considering that this includes Alfredo Aceves aggravating habit of blowing games that was pretty good. Fast-forward to May and the Sox pitching staff has a collective ERA of 4.82. Add the sloppy defense, (cough, Will Middlebrooks, cough) and you have a recipe for disaster.

So it seems that John Farrell is now facing his first great challenge as manager of the Sox. The season is far from over; aside from the fact that it is only mid-May the Sox are only two games behind the Yankees who have tested father time long enough. The question that remains is whether the Sox will continue sinking or whether they can bounce back from this and fight on. April was an aberration for any team, but it is an indicator of how talented the Sox are and what potential they can reach.