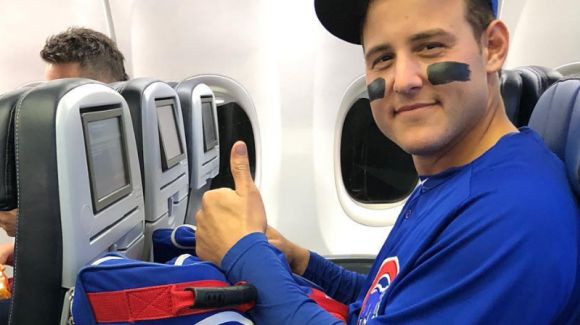 The Chicago Cubs are currently in the midst of a horrific stretch of MLB scheduling.

Somehow, due to a convoluted set of circumstances, -- think untimely rainouts -- they're being forced to play an entire month without a day off.

While these dudes aren't exactly laboring in a coal mine, this is still far from ideal.

Anyway, as part of this brutal gauntlet, the Cubbies had to travel to DC in the middle of a critical home stand to make up a game against the Nationals.

Adding even more intrigue to the situation was the brooding presence of Hurricane Florence, which was looming ominously in the Atlantic at the time, threatening the entire Eastern Seaboard.

To combat this adversity, Anthony Rizzo decided to take action, formulating a brilliant, yet simple plan.

He wore his uniform on the team plane.

Well, for levity, of course.

The Cubs' de facto leader even wore his eye black, because the glare on many flights is blinding.

His teammates seemed to be enjoying themselves, as well.

Here's the Riz arriving at the ballpark, ready to ball.

There's an interesting postscript to this heartwarming tale.

After the Cubs' 4-3 ten inning win over the Nationals, the boys had to fly right back to Chicago to resume their homestand.

Rizzo prefers to travel light, so he remained in his now game-worn uniform for the flight home.

He explained it thusly:

Rizzo says he brought no clothes and will wear his uniform home as well. "That's all I got."

This is inspiring and disturbing all at once.