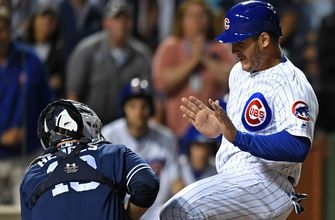 There are many rules in professional sports that are open to interpretation.

In MLB, the relatively new edict about home plate collisions would be one of them.

It seems more or less simple on the surface, but the rule is still rather ambiguous.

We were treated to a fun example of this recently at Wrigley Field.

Well, the Padres would probably take exception to the fun part.

You know, the very thing this rule was designed to prevent.

It wasn't necessarily the most violent collision you will see, but that knee to the midsection didn't look particularly pleasant.

Yes, both managers did have vastly different takes on the play, but that's to be expected in these situations.

Cubs skipper Joe Madden was just standing by his player by enthusiastically supporting the effort.

Hedges had possession of the ball, but the question is whether Rizzo deviated from this path to initiate the contact.

Clearly, this rule is insanely convoluted.

Then again, who the hell knew who Andy Green even was before this incident?

MLB, in its infinite wisdom, has deemed the play illegal, but decided not to discipline Rizzo.

In the meantime, Hedges and his bruised right thigh will try to pick up the pieces.