Another Pitcher Nailed by a Liner; Old School Can Stop This 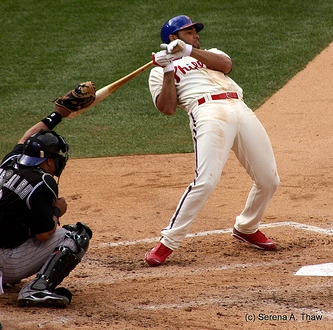 This time it was Matt Moore, now pitching for the Atlanta Braves.

That's the same Atlanta Braves who have just lost 40% of their starting rotation -- Kris Medlen and Brandon Beachy -- to Tommy John surgery.

And Moore was lucky this didn't put him on the shelf for an extended period of time:

Dude could be a hockey player.

An old rule of thumb in baseball is that the farther a ball caroms after an impact to the head, the less serious the damage will be. Here, it appears that Moore was at least able to get his glove up to lessen the blow. Boegarts didn't seem to get good wood on the ball, which is also fortunate in this instance. Moore suffered a few stitches in his lip and is awaiting results of a concussion prognosis.

As Aroldis Chapman can attest, it could have been worse.

Check out how far the ball ricocheted. It's an indication that Chapman could have been injured even more severely. As it is, the Reds flamethrower still needed to have a titanium plate embedded into his skull to protect the bone broken above his left eye. The aftermath of this procedure is a grim inference of what that line drive did to him. The batter, Salvador Perez, was in shock himself, raising his hands to his helmet in realization of what just happened:

While these are not new occurrences in baseball, anecdotal evidence seems to indicate they're much more frequent. And many pitchers -- from both back in the day and current rosters -- believe they know why.

Batters these days wear too much body armor.

They simply don't fear being drilled by inside pitches anymore. Thus, they dive into middle-outs and are able to barrel up. Those are the ones that get rifled back up the middle, with the pitcher directly in the line of fire.

This makes sense. If data ever confirms it, however, baseball will be left with another problem. In these medically-aware times for athletes, it will be a challenge to support a rule for protective gear to be removed.

The lethal potential of head injuries should take priority over bruised bones, in spite of the latter also being capable of sidelining players for weeks.

Every physical activity carries risks. Value judgments are made all the time, and it's time for baseball to take a harder look at pitcher safety beyond impractical suggestions such as unwieldy skull helmets under caps and goalie-type masks. And he simplest solution is to ban batters' padding below the neck so they'll think twice before diving into pitches with impugnity.

Baseball has experienced only one fatality in its history. Unless it takes the obvious measure to protect pitchers, Ray Chapman could soon have unwanted company.