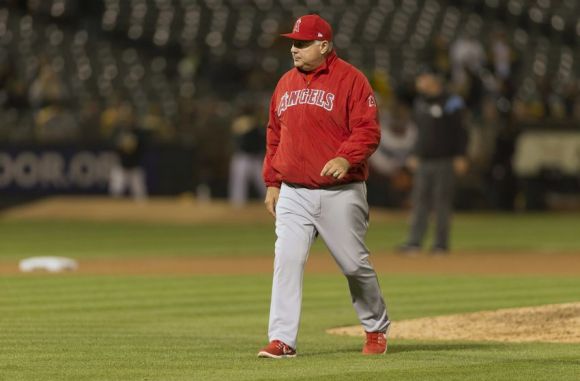 It's probably the best rule on The Commish's hit list for allegedly speeding up the game.

But it comes with a loophole as wide as the diamond itself.

The Los Angeles Angels just became the first team to have an opportunity to call it out, and they didn't do it.

How is it possible to be so lacking in curiosity?

Rob Manfred seems to think that shaving a minute or two here and there from the baseball experience will have casual fans flocking back to the yard more than, say, crazy and overpriced concession fare.

Fans already come with their very own between-pitch divertissements -- custom features for smartphones -- but if they're gonna welcome one of Manfred's edicts, it'd surely be mound visits.

One dude who knows how to get the most outta them is Halos skipper Mike Scioscia. Case in point, this expression of contempt for an umpire's judgment cloaked in an impromptu infielder seminar a few years ago:

In last night's 8-7 victory in Houston, the Angels became the first team to make six mound visits, the maximum allowed under the new rule.

Except, how can it be a rule if there's no real enforcement written into it?

If a team is out of visits, the umpire will have discretion to grant a visit at the catcher's request if he believes there has been a cross-up between the pitcher and catcher.

That's it. No repurcussions if a manager or coach decides to take a seventh stroll to the mound on general principles.

Scioscia stands 6-2 and looks like he doesn't need a broken beer bottle to hold off a crowd.

So, what's the blue gonna do? Eject him? On what grounds?

What happens with the seventh mound visit? Penalties? Manfred: “There has to be a pitching change. That’s the only way they can go to the mound again. That’s what happens.”

So, who's gonna force that, knowing the game will be played under protest?

Scioscia came so close to triggering the anarchy this situation needs.