Angels Beat Dodgers in a Most Unusual Way 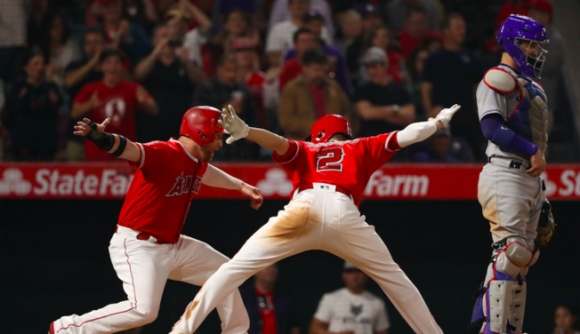 There are a seemingly infinite number of ways to win a baseball game.

The Los Angeles Angels just provided one of the more unusual ones.

In the epic Freeway Series, the Halos vanquished the Dodgers with one of those patented walk-off strikeouts.

By the way, kudos to Cameron Maybin for doing the heroic whiffing.

That game-winning punchie was his fourth of the game, thus garnering the not-so-coveted Golden Sombrero while capping off a somehow productive 0-5 night.

Meanwhile, our goat would have to be Dodgers catcher Yasmani Grandal, who has certainly had better nights.

Although he actually did tie the game with a solo homer in the top of the ninth, dude's performance in the bottom half left much to be desired.

The pitch that eluded him should've been stopped in the first place, but he obviously exacerbated the situation and ended the game with that errant toss into right field.

While these facts are beyond dispute, Chase Utley probably could've come off the bag to catch the ball.

Clearly, there's plenty of blame to go around.

In the meantime, with Maybin playing this poorly, the Angels are going to be hard to beat going forward.