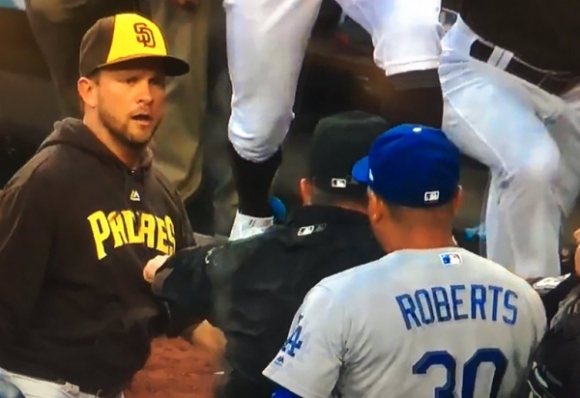 One of the stranger MLB tussles you'll see occurred recently in San Diego.

The difference between this angry ballet and the usual disagreement was the fact that both managers were directly involved.

In fact, they appear to have started the entire affair.

Things even got physical!

Have a look see:

As you can ascertain, Dodgers skipper Dave Roberts didn't take kindly to something his Padres counterpart Andy Green had to say.

After the relatively benign shove, the benches just had to empty, kicking off the standard fire drill, which eventually led to both managers being asked to leave the game.

The bullpens emptied, too, which is also tradition, although usually by the time they get out there, it's almost time to turn around and head back.

It appears that San Diego's Jose Pirela, who is definitely a household name in his own household, was tipping off pitch locations from second base.

As a rule, pitchers usually don't appreciate this sort of thing, so Wood naturally took exception.

He may have even threatened Pirela.

Green, last seen complaining about cheap shots from Anthony Rizzo and the Cubs, had much to say after the game.

Dude's making some sense, there.

Anyway, the Padres will be headed to LA in August, so get those tickets now if you can.