And the BoSox Closer Is ... 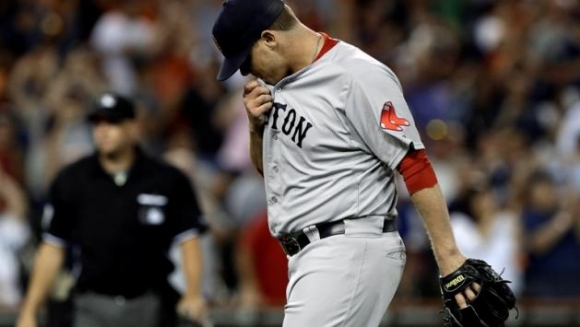 Only one word can adequately describe Andrew Bailey’s performance of late: ugly.

Bailey’s 4.03 ERA is pretty putrid, but when he adds his downright atrocious 2.4 HR/9, then the Boston Red Sox have a fairly big mess on their hands.

John Lackey pitched a gem against the powerhouse Detroit Tigers; anytime you face a lineup with the likes of Miguel Cabrera and Prince Fielder, it’s a miracle to give up fewer than five runs, but Lackey managed to toss seven innings and yield only two. The Sox brought in strike-throwing machine Koji Uehara, who pitched a solid eighth inning leading to Bailey to close. Boston had planned this out way back when, as the way the system should work.

But as he has done all season, Bailey blew it big time. He walked Victor Martinez to start the inning and then threw another flat fastball right down the middle to Jonny Peralta, which he promptly crushed for a walk-off home run.

If the Sox were a sub-.500 team, then keeping Bailey on as closer would make sense. Why shift things around when you really can’t get any better? In that circumstance last season, they happily named Alfredo Aceves the closer, and when that proved to be fruitless, they just did not care.

But the 2013 Bosox are a first-place team that has lost quite a few games to this 'poser-closer' and cannot afford to lose anymore. With the Orioles and Yankees constantly causing trouble, the Sox need to make a move. If Bailey is going to underperform, then they had better find someone who can shut down the opposing offense because they shouldn’t let blind loyalty cover up the fact that Bailey just does not have it this year.

As for options, the Red Sox do not have many. The only standout is Junichi Tazawa, who has excelled as a setup man and may do well as the closer. For now, Farrell has named Uehara as the closer, but considering his age and lack of durability, that may not happen for long. The other option is to take it to the streets and make a trade.

Whatever happens, Farrell and general manager Ben Cherrington have to do something before they lose the season.