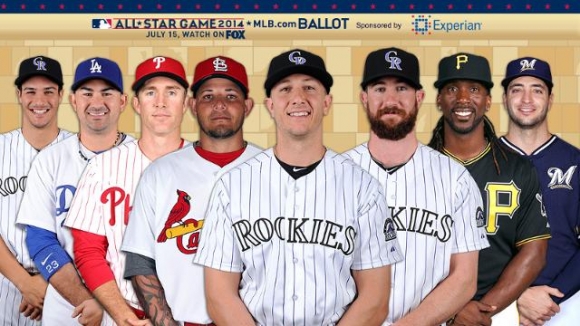 Hope youse all enjoyed the 2014 American League All-Snark team. It wasn’t easy to select a roster that could compete with the crème of the crop, the crème de la crème, and the Pepe Le Pew’s.

It’s time to critique the senior circuit, and that's not the same as an electrical engineering class you took in college.

The National League has special rules -- and special talents -- that must not be ignored. As interleague play becomes a daily occurrence, perhaps the DH will become a permanent fixture.

Don’t ask Madison Bumgarner his opinion of the DH. We already know what side he’s on.

I’m going to try really hard not to list the entire Padres starting lineup on this team, although that would be taking the easy way out, or a blue pill for you Sci-Fi buffs. There’s actually some fairly decent choices for this honor in the NL this year. Jarrod Saltalamacchia received some consideration; however, I picked him up on my fantasy team earlier this year and he's not All-Snark worthy, because I said so.

The Brewers have been the surprise team in the NL over the first half and will be in a hotly contested pennant race the rest of the season with everybody not named the Cubs. The NL Central leaders are separated by a total of 3½ games with three other teams, again not named the Cubs. Reynolds just needs to continue to hit homers, strike out at an alarming rate -- amazingly, he doesn’t lead the NL -- and play good defense at 1B, then repeat in October. Suuure.

His batting average has dropped 14 points from .224 to .210 in the past two weeks.  An 0-7 on 24 June was the start of his demise, and word out of the nation’s capital is Espinosa might be trade bait. Still. Good luck polishing that turd!

Wow, there were so many qualified candidates, it was difficult to pick just one SS on this team. But Cabrera gets the nod over Ian Desmond’s 111 K’s and 15 errors, Jean Segura’s .266 OBP, Adeiny Hechavarria’s -0.3 WAR, and Zack Cozart’s .223 BA. This is probably the strongest All-Snark group of position players in either league. Cabrera is probably realizing the effects of drug testing, since he was named in the Biogenesis report. From All-Star to scrub, the new cycle of MLB players careers.

Brown was tagged as a can’t-miss prospect, and the Phillies reportedly wouldn’t include him in a blockbuster trade last year. He seemingly can’t hit the ball, field the ball, or throw the ball, and only has six stolen bases. How does Ruben Amaro Jr still have a job?

It’s clear that the Upton brother’s reunion in Georgia has only had a positive effect on one of them. Upton leads MLB in strikeouts (116), in just 349 ABs, or roughly a third of the time he’s walking back to the dugout with his head slung low. Perhaps the move to Cobb County in a few years will rejuvenate Upton into making contact with the ball. Something’s gotta give.

This team wouldn’t be complete without teammates from the Cubbies. A .204 BA, .250 OBP, and a -0.6 WAR will get you sent to Iowa -- and possibly as far west as Boise -- if you don’t show improvement quickly. The Cubs open the second half at Arizona, so the ball should be flying in the desert. The question is, will Cubs be hitting any of them?

Designated Hitter – Just seeing if you’re paying attention. Everybody knows there's no DH in the National League. Come on, man!

An argument could be made for Edwin Jackson of the Chicago Cubs, but that would be splitting hairs. Stults leads the league with 11 losses and a -1.0 WAR, which is enough to push him over the top. Jackson only has a -0.9 WAR and has somehow won five games. Stults is not likely to get many more chances to improve on that 3-11 record in the second half, as the Padres are going to blow up the roster and have a fire sale. But hey, so are the Cubs.

Romo lost his closer duties after posting a 4.86 ERA and blowing five saves. Still, the Giants are in first place and their starting pitching is so good that maybe they won’t need to use a closer too many times. Nah, those games against the Dodgers in September are going to be close!

I don’t think it would be fair to choose a manager for this team, as the manager is not the one hitting, pitching, or fielding anything other than a dirty look from an umpire, and they do not put together the roster of outcasts and misfits in the dugout.

The All-Star manager is always from the reigning league champion and he gets to select two other managers to help him out during the game. For example, Mike Matheny of the Cardinals selected Pittsburgh Pirates manager Clint Hurdle and Atlanta Braves manager Fredi Gonzalez to assist him in the dugout.

So if we apply these standards, you would have to take Diamondbacks manager Kirk Gibson -- who owns the worst record in the NL -- Colorado Rockies manager Walt Weiss, and Cubs first year manager Rick Renteria. Let’s see what these three can do with this roster.

I’m dying to see how it would play out. Probably like this: