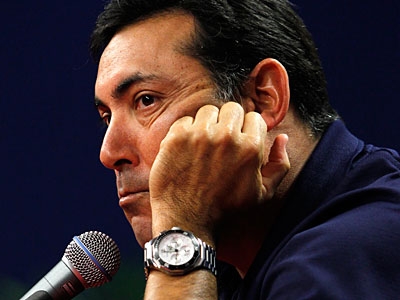 In the same interview, Amaro also voiced his displeasure with the fans for “[bitching] and [complaining] that the team [doesn’t] have a plan.”

Amaro is far from popular in Philadelphia for a number of reasons, including:

Amaro tried doing some damage control later in the day, but the die has long since been cast in the mind of the Phillies faithful.

Amaro: "I'd like to apologize to fans. The comments weren't meant to disparage fans. ... I used my words poorly." #Phillies Dude's been given the nickname Ruin Tomorrow in the City of Brotherly Love for his mismanagement of the team’s future. Several twitter accounts, such as @RuinTomorrow and @Ruin2morrowJr have been created by the ravenous fan base to mock the man that many in Philadelphia find responsible for destroying their franchise.

Amaro’s contract is up at the end of this season, so many Phillies fans are hoping for an early Christmas present. However, Pat Gillick, Ruben’s predecessor as the team’s GM and current Phillies Club President, stated last season that Amaro would “absolutely” remain with the team, so long as he was under contract.

But his future may now be in question, given these remarks, but as of today, Amaro's still in control of the team’s future.

Don’t fret Phillies fans; you're not the only team in the NL East that has a dumpster fire for their team’s management.