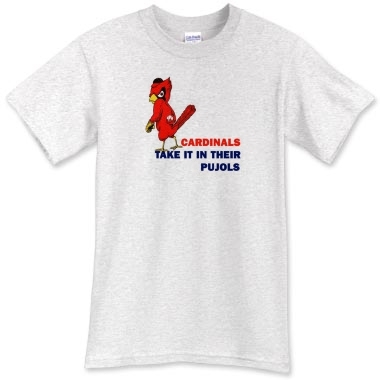 We will dance the hootcie-kootchie
I will be your tootsie wootsie
If you will meet in St Louis, Louis
Meet me at the fair

Mainly, it's Cardinals fans singing and dancing in the streets after all the World Series championships the city has won (11), second only to the Yankees in big league history. They nearly added a 12th last season, but Big Papi wasn’t gonna stand for it.

The Cardinals enter 2014 as a popular pick to represent the NL again in the Series, which looks like an even smarter pick, given Clayton Kershaw’s DL stint and Bryce Harper suffering two potential concussions on Opening Day.

Not that St Louis would need luck on their side or devastating injuries to their rivals. Well, Kershaw having an achy back won’t hurt. Get it?

St Louis has more to offer than just Budweiser. But these dudes aren't on the list:

No issues with Rice’s defense, as he only committed two errors and allowed three passed balls. However, he was surrounded in a lineup that featured HOFers Stan Musial, Red Schoendienst, and Enos Slaughter. You’d think he’d be able to get several sacrifice flies or at least ground out and still drive in somebody from third base with those OBP gods. The Redbirds got 34 RBI’s out of Rice. Good thing Musial returned from the war in one piece.

I don’t care if this was the Dead Ball Era and the mitts were made out of actual cowhide, 28 errors by a first baseman is atrocious. Cardinals fans should appreciate Keith Hernandez, Mark McGwire and Albert Pujols even more after putting up with hacks like Hackett. He could be the single reason they changed their name from the Perfectos!

Bet you didn’t expect to find a former heavyweight champion on this team, which says more about the megastar Cardinals second basemen over the years, such as Rogers Hornsby, Frankie Frisch, and Red Schoendienst, along with Tommy Herr, Fernando Vina, Jose Oquendo, and Matt Carpenter. Did I really just mention Fernando Vina and Rogers Hornsby in the same sentence? Just shoot me.

Just to give you some perspective, the 1908 Cardinals hit only 17 home runs -- and back then, even a ball that bounced over a fence was a home run -- hit .229, and scored 375 runs as a team. Pitiful, even by Dead Ball standards.

With the Wonderful Wizard of Oz, Ozzie Smith, manning the 6-hole for so long, the candidates were few and far between. Still, the 1970 Cardinals were a powerhouse that probably should’ve won the World Series if it weren’t for the ominous beginnings of the Big Red Machine. Oh, and don’t forget about 1970 Boog Powell.

Ummmm, six dingers is the leader in the clubhouse for the All-Time Snark Cardinals team? Pathetic. They hit 16 collectively and Milt Thompson is basically the cleanup hitter. Where’s 1985 Willie McGee when you need him?

So, essentially, this rotation just needs 1942 Mort Cooper, 1968 Bob Gibson, and 1985 John Tudor, and they’ll be back in business. Seems like reasonable expectations.

Holy Clydesdales! Whose idea was it to make Franklin the closer? It’s quite a range of decades and eras, but who gives a road apple? These guys were horrible!!

Virtually the entire city of St Louis was still running on a Mark McGwire high of home runs and slugging percentage, so sneaking in a closer like Bottalico was perfect timing. Cardinals fans, for some reason, didn’t seem to think that cinching the end of the game was that big of deal. We beg to differ. So do Cardinals fans who remember Game 6 of the 1985 Series.

Seriously, don’t feel sorry for Cardinals fans. They’ve enjoyed their share of success over the years.

2014 doesn’t appear to be any different. Longtime manager Tony LaRussa will be inducted into the HOF this summer. Mark McGwire should join him, but that appears to be a debate for another day.