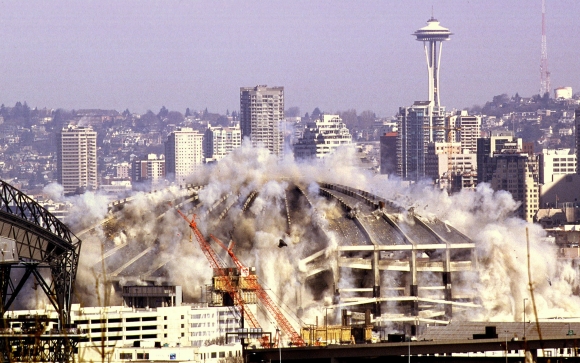 At last, we’ve arrived in the Emerald City, home to Microsoft, Amazon, grunge music, the Space Needle, Pike Place Market -- where they’ve made an art form out of throwing fish -- the $5 cup of coffee, and last but not least, the Seattle Mariners, who came into existence just one year after I was born.

The hometown Mariners are special to me in that I was hired to work as part of their game day staff, so I won’t have to pay to watch mediocre baseball this season. I actually get paid to watch this team. That’ll take the sting away slightly.

Many people associate the Mariners with their historic 2001 season, where they set a modern-record by winning 116 games and introduced the world to Ichiro Suzuki. He was such a cultural icon, they named a delicatessen after him: Ichiroll Sushi.

Baseball fans, particularly in the Pacific Northwest, think of the Mariners as the team that's made some of the worst trades in baseball history, and some of those players will be featured on the All-Time Snark team. Thank you, Woody Woodward, for giving us so much material to work with.

Valle showed promise after a limited 1986 season by hitting .340 in 60 PA’s, but his average plummeted to .256 in 1987 and steadily declined the following seasons, reaching a career low in 1991. He excelled at throwing out baserunners, so it wasn’t all bad. That is, at least as long as the pitch hit him right in the mitt, judging by those 15 passed balls.

Kotchman is a prototypical retread veteran the Mariners have a knack for signing when there's literally nothing in their farm system. What’s worse about Kotchman is he led directly to the Mariners trading Cliff Lee for Justin Smoak that season. Fans are still waiting for him to turn into the über-prospect he was so highly touted as being in the Rangers system. There’s still time for Smoak to turn it around, because the Mariners have no other options in 2014. But they didn’t get enough for Cliff Lee, as he continues to be one of the top LHP in the game.

Expect several players from the Mariners' first few years of existence to show up on the All-Time Snark team, as they lost no fewer than 95 games in each of their first four years. Cruz is no relation to Mariners top draft pick José Cruz Jr, but there's another terrible trade. Who can forget them shipping Cruz to the Blue Jays for Mike Timlin and Paul Splojaric in 1997?

Figgins will go down as the worst free agent signing in Mariners history, not just during GM Jack Z’s tenure. Figgins forgot how to hit, walk, and steal bases as he had done so frequently as a member of the Angels. He has since signed on with the Dodgers, so watch him play a pivotal role in their championship run this season. That’s how ex-Mariners work.

If you’ve ever wondered where the term Mendoza Line came from, it’s because of this gentleman, as you can see by his .198 BA. Yep, this is the dude who started one of the most dubious sayings in baseball lore. If we were to create an All-Time Snark All-Star team, Mendoza would be the shortstop, for sure.

During Ken Griffey Jr’s time in Seattle, he played with an astonishing 37 different left fielders, and pretty much one RF in Jay Buhner. That's actually one of the few good trades the Mariners made; they sent Ken Phelps to the Yankees for Buhner in 1998. I can count on one hand the good trades they’ve mad; Mark Langston to the Expos for Randy Johnson and Darren Bragg to the Red Sox for Jamie Moyer in 1996 are the other two. Felder got the job in 1993 because the Mariners gave up so quickly on Kevin Mitchell, whom they acquired from the Giants in 1992 for Bill Swift and Mike Jackson, another stellar trade. Then Felder was dealt along with Mike Hampton to the Astros for Eric Anthony, who was a complete bust. Saunders showed promise during the World Baseball Classic for Team Canada. Unfortunately, the lack of OF depth the past couple of seasons led to another terrible trade when Seattle -- or should I say, Jack Z -- traded Doug Fister to the Tigers for Casper Wells, who no longer plays for the Mariners. Saunders is counted on to be one of the top run producers for the 2014 Mariners. He just won’t be lighting up pitchers from Chinese Taipei, Italy, or Australia.

Parrott had the plug pulled after just 94 innings and was sent to the bullpen, but that record was just too much to overlook for an All-Time Snark team. While a member of the Boston Red Sox, Matt Young threw a no-hitter and lost. That’s something you would expect as a Mariners fan. Silva is the second-worst free agent signing in club history, but that was thanks to former GM Bill Bavasi, who set the team back at least a decade. It would be fitting if Erik Bedard made the rotation, since that was Bavasi’s signature trade. He sent top prospects Adam Jones and Chris Tillman to Baltimore for Bedard. Oh, and throw in reliever George Sherrill -- who made the All-Star team for the Orioles -- and you have the second-worst trade in franchise history. There's just no topping Heathcliff Slocumb for Jason Varitek and Derek Lowe.

Ayala is the most despised player in Mariner history, and that’s saying something with candidates like Slocumb, Bob Wolcott, and Bob Wells. If the Mariners had any sense of a bullpen in the 1990’s they could’ve made a serious playoff run with that lineup. Instead, they threw in the towel in 1998 and traded future HOFer Randy Johnson to the Astros for Freddy Garcia, José Guillen, and John Halama. Now, some people think this was a good trade for the Mariners since all three players were key contributers to the 2000 and 2001 playoff teams. Johnson went on to win four consecutive Cy Youngs plus a World Series MVP and title as a member of the Arizona Diamondbacks. Tell me which player you would rather have.

Mesa epitomizes the bullpen struggles during this era. Luckily, the Mariners found Japanese sensation Kazuhiro Sasaki, who earned 2000 AL Rookie of the Year honors. One great season with the Cleveland Indians earned Mesa a big free agent contract. Too bad Norm Charlton fell off so badly after his terrific 1995 season, otherwise the bullpen mess could’ve been mitigated and perhaps some terrible trades would never have been made. Hindsight is 20/20.

The Mariners enter 2014 with reasonable expectations of finishing somewhere around .500, which might be good enough to save GM Jack Zurdrencik’s job after signing free agent Robinson Cano to a ginormous contract. The Fernando Rodney signing may prove to be more valuable, though, as the closer situation has been a mixed bag over the past few seasons.

New manager Lloyd McClendon has his work cut out for him. The fan base is growing impatient waiting for the young guys to develop, like Smoak, Dustin Ackley, and future sumo wrestler Jésus Montero.

Youngsters Mike Zunino, Kyle Seager, and Brad Miller look like the real deal, but top pitching prospect Taijuan Walker will start the season on the 15-day DL, and in typical Mariners fashion, they're going with veteran retreads to patch together the rotation. Yes, I’m talking to you, Randy Wolf and Scott Baker.

If Corey Hart can rebound and catcher John Buck can mentor Zunino, it could be a decent summer, even if they play in one of the toughest divisions in baseball. At least they get to play the Astros multiple times.

The only two current teams that have never played in a World Series are the Mariners and the Washington Nationals. My bet is the Nationals win that race.