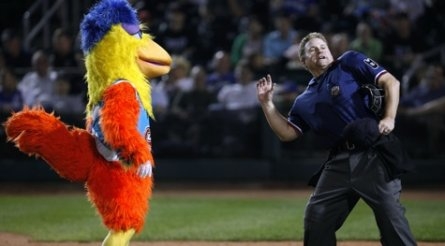 Some of the most colorful uniforms have come from the Whale’s Vagina, along with some colorful characters like John Kruk and Milton Bradley (not the board game pioneer, and who would give their kid a name like that? No wonder he has issues).

The Padres have been around since 1969 and have only had 13 winning seasons that produced with two World Series appearances, where they had absolutely no chance of bringing home hardware. In fact, the Friars post-season success has been few and far between. Their last appearance in 2006 resulted in Trevor Hoffman’s legacy being forever tarnished.

Perhaps they've just had bad luck, facing off against two of the greatest teams in the divisional era, the 1984 Detroit Tigers and 1998 New York Yankees. Perhaps they're still adjusting with growing pains; they have some other dubious distinctions:

About those jerseys, expect to see many players from the era of goldenrod and chocolate brown uniforms, as the Padres didn’t break a .400 winning percentage until 1975, their seventh season of existence.

What a remarkable beginning.

You may recognize Fred shares the same last name with another great catcher, Jason Kendall, which is not just a coincidence because they're father and son. With the Kendall family, it’s clear that the talent skipped a generation. Jason was a 3-time All-Star and regarded as one of the top catchers in the game. Fred was neither.

Colbert had just come off three straight All-Star appearances, so he was bound for a decline at some point. It came rapidly, as he was out of the league after the 1976 season. Playing for the Padres in the early 1970’s probably took its toll, both physically and mentally, on Colbert and Padres fans alike.

Campbell is best known as a baseball announcer on ESPN, where he does a fantastic job. He has that made-for-TV voice and provides quality insight instead of the usual mindless clichés. However, he did not do a fantastic job playing 2B, but when you’re banished to these Padres teams, expectations should be tempered.

Roberts didn’t quite have a full season of AB’s but was the main 3B this season, and we wouldn’t want to deviate from our all-early-1970’s Snark team we've got going. This position was difficult to select a top candidate. Padres 3B have been pretty awesome over the years, such as Nettles, Caminiti, Sheffield, Loretta, and Headley, to name a few). Roberts was a pretty good defensive player, so there’s that.

Enzo hit precisely two career home runs over six full seasons and was highly touted as the next big thing in the line of Venezuelan shortstops, but the most similar player to him, according to the acclaimed website www.baseball-reference.com, is Skeeter Webb. Does he strike you as the Luis Aparicio/Omar Vizquel type? Nah, me neither.

Well, would you look at that! If it weren’t for Mariano Rivera’s cousin, we would have a clean sweep of 1970’s Padres, and for good reason. When Tony Gwynn entered the league in 1982, the Padres OF was solidified until his retirement in 2001. Solidified, that is, until Ruben Rivera joined the Pads in the infamous Homer Bush/Hideki Irabu trade. Although Rivera posted a career high in homers in 1999, this was around the height of the Steroid Era, and who knows if they were legit HR’s or what was going on. He was teammates with Ken Caminiti, after all. If Johnny Jeter was related to Derek Jeter, then Padres fans should be excited. Otherwise, he’s just another statistical casualty of the early years in San Diego.

The saga continues with early 1970’s Padres dominating the All-Time Snark team. Don’t worry, there are more seasons to follow, as we have yet to critique the bullpen. Jones won the Cy Young in 1976, and Clay Kirby was a terrific pitcher for Cincinnati’s Big Red Machine. As you can see by these ERA’s, San Diego played in a pitcher's park and continue to do so at their gorgeous home in Petco Park, which is why you don’t see most of the HR/9 stats listed. However, those loss-column totals are ridiculous.

So much for not listing HR/9 statistics. This group gave up their fare share of gopher balls, and walks, and hits, and laser beam doubles to left. Thatcher actually had an awesome season in 2010, so that trade with the Cardinals for Khalil Greene worked out okay. Chiffer was not allowed to pitch in the World Series for the 1984 Padres, thankfully. Not that it would’ve mattered against the juggernaut Tigers and Series MVP Alan Trammell. The Padres bullpen has been one of the best in baseball the past couple years and was solidified this off-season with the signing of Joaquin Benoit. Jim Leyland just never grew fond of him.

The triumvirate of the Nasty Boys was broken up in 1992 when Myers turned into a Snowbird and went south for the winter. With future HOFer Trevor Hoffman closing the door to Hell's Bells for so many seasons in San Diego, there weren't many options for an All-Snark team closer. Don’t forget, HOFers Rollie Fingers and Goose Gossage were also closers for the Padres. Myers has borderline HOF statistics, as he led the league in saves in 1993, 1995, and 1997. So if Myers was playing odd/even, we know what he’d choose.

The Padres are probably a couple of years away from competing in the ultra-strong NL West. The Dodgers and Giants continue to build All-Star teams. Former GM Kevin Towers now calls the shots for the Arizona Diamondbacks, and he made a smart decision by trading for the Angels' Mark Trumbo. So, I guess it’s a race between the Padres and Rockies for the basement.

That should be invigorating! 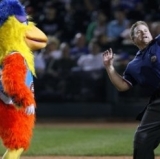