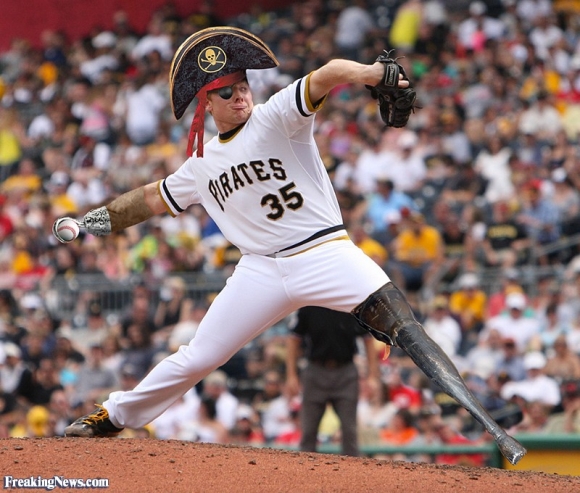 The Pittsburgh Pirates finally ended a run of 20 consecutive losing seasons in 2013, not only by winning 94 games, but by earning a Wild Card spot, beating the Reds in a one-game playoff before losing to the Cardinals in the NLDS.

All in all, 2013 was a successful season in the Steel City, but let’s not feel like Pittsburgh fans have been long deprived, as they've enjoyed a few championships thanks to the Steelers and Penguins during the Dread Pirate Roberts losing stretch from 1993 to 2012.

Forget Joe Dimaggio’s 56-game hitting streak or Cal Ripken Jr’s consecutive games played streak. The Pirates' 20 consecutive losing seasons may never be broken in our lifetime. Not even by the Cubs. Enjoy the success while it lasts, Pirates fans, as this game can change quickly.

This mess started the season Barry Bonds left as a free agent for San Francisco. Just one more reason Bonds is vilified throughout major league baseball.

At least Bonds provided valuable entertainment with his spring training confrontation with then Pirates manager Jim Leyland. That was an All-Snark team-worthy event!

The Year of the Pitcher claims another victim as statistics were difficult to accumulate in 1968 due to the raised mound. One has to believe the 12 intentional walks were because May hit in front of the pitcher, as he clearly didn’t provide lineup protection to Roberto Clemente.

Besides providing no home runs, Bartirome had no sacrifice flies, hits by pitch, and intentional walks. For our purposes, Tony provided no added value to the Pittsburgh Pirates, which is the most intangible stat possible.

The Pirates have been an MLB franchise since the beginning of time, so it’s great to see representation across all eras of baseball history. Box score keepers were extra busy marking E-4 on the score card, as those 55 errors stand out amongst the All-Time Snark team. You try fielding an unwinding baseball with a chunk of cowhide stuck to your hand!

1916 saw the return of players from the failed two-year experiment of the Federal League. Now, I’m an economics major, and competition is good for capitalism, but it was not good for MLB at the height of the Dead Ball Era. Baird suffered due to the increase in competition and likely would’ve had even 'better' stats had baseball integrated during this time. But better late than never.

This double-play combination of Tavares and Bierbauer produced 83 total errors up the middle, and it would be neat to see how many double plays they would’ve turned had they actually been teammates. By 1975, equipment had improved dramatically in addition to teams actually practicing fielding ground balls before games. Perhaps the artificial turf of Three Rivers Stadium was too fast for Tavares, or he just sucked, or both.

When compiling the All-Time Snark Pittsburgh Pirates, I expected to see many seasons from the 20-consecutive loss teams, so it’s a little disappointing when a researcher's hypothesis is disproved by scientific facts and statistical analysis. Nonetheless, here we have a great representation of players, and anyone named Goat deserves a roster spot on an All-Snark team. Don’t worry, Pirates fans, we’re about to delve into what went wrong for those past 20 seasons.

What did I tell ya? The Pirates couldn’t have had 20 consecutive losing seasons without a tremendous contribution from the pitching staff. Let’s not forget about the Pittsburgh drug trials in 1985, where several prominent Pirates were forced to testify in front of a grand jury about cocaine use in baseball, which had a profound effect on the team; they lost 104 games that season. Although DeLeon wasn’t one of the players involved in the investigation, the whole ordeal had to have contributed to the dismal season. Even the Pirate Parrot was implicated in the cocaine ring. Cocaine is only a performance enhancing drug for about 96 minutes, which provides mascots just the boost they need to make it through watching terrible baseball. Pittsburgh hosted the 1994 MLB All-Star game, and only 2B Carlos Garcia made the team for the hometown Buccos. Cooke had stiff competition from a stellar NL pitching staff and was left off the roster. He was snubbed!

Even more evidence that Pirates fans suffered through 20 consecutive losing seasons as a result of poor pitching is the fact that Pittsburgh actually had some decent hitters during this run, like Jason Kendall, Brian Giles, Jay Bell, Aramis Ramirez, and Kevin Young. This eclectic group of relievers gave up hits, runs, walks, and home runs at astronomical rates, led by Jeff Wallace and those 8.58 BB/9. That meant he was walking almost a batter per a full nine inning game. Mark Petkovsek winning three games in 1993 might be even more amazing. How was he even allowed to be put in position to win three games?

It is common practice in publishing to cite at least three sources to validate your findings, and Matt Capps provides the third valuable source for my hypothesis that pitching was the Pirates' problem from 1993-2012. Okay, so losing Barry Bonds and Bobby Bonilla within a year of each other didn’t help, either. Naturally, Capps was an All-Star in 2010 and won the game for the NL in Anaheim. Naturally, Capps was a member of the Washington Nationals at the time and was traded to the Twins shortly after the game for top prospect Wilson Ramos. Way to capitalize on Midsummer Classic success, Nationals!

Pirates fans must’ve felt the joy and elation of a six-year-old on Christmas morning last season when the Pirates made the post-season for the first time since 1992. The Pirates will be in great position to make a run at least for another Wild Card spot as the Cardinals will be the clear NL Central Division favorite.

Ironically, the Pirates' newfound glory can be attributed to developing a quality starting rotation -- as opposed to former No 1 pick Kris Benson -- with some quality veterans in the bullpen, such as when Jason Grilli and Mark Melancon really discovered the fountain of youth.

Throw in leader Russell Martin behind the plate, and you have a very solid core to go with the youngsters Pedro Álvarez, José Tabata, and Neil Walker. Gasp! The Pirates even traded for players at the deadline by acquiring Twins 1B Justin Morneau instead of finding themselves in the usual position of dumping salary for prospects.

Can the Pirates return to their glory days of the 1970’s where they were an NL powerhouse, winning two World Series titles? The upcoming 20th Century Fox film, X-Men: Days of Future Past, would be a good model for the Pirates to undo those 20 consecutive losing seasons.