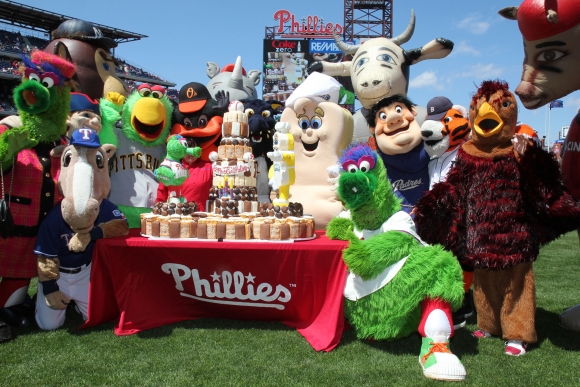 For a team that began playing organized baseball during the Benjamin Harrison presidential reign, the Philadelphia Phillies have only won two World Series championships and were the first MLB team to lose 10,000 games.

The Phillies have certainly bunched their successful seasons together, losing three straight NLCS from 1976 to 1978, just like the Royals did in the ALCS, and they made the playoffs in five consecutive seasons from 2007 to 2011, including that 2008 World Series victory over the Tampa Bay Rays.

So basically, the Phillies live by the motto: “When it rains, it pours.”

Whenever you're looking back at a baseball player's career, there are always statistical anomalies that appear if you look hard and long. For Atwood, his 28 RBI’s, 27 runs scored, 26 strikeouts, and 25 walks serve as a sort of atomic clock just counting down to the end of days. What would come next, 24 doubles? He’s a catcher, he hit eight.

The story of Bransfield’s season is the doughnut hole. That's a goose egg to the uninitiated, meaning he had zero: home runs, sacrifice flies, hit by pitch, ground into double play, intentional walks. That's quite an impressive collection of no statistics.

Judging by the 36 errors Childs made as a second baseman, teams hadn’t figured out the art of fielding ground balls before each game. Looking even further into Childs' stats, it’s difficult to ascertain whether teams held batting practice before games, either. Could you even imagine what it was like to put on a professional uniform in 1902?

Bell’s father, Buddy, was one of the top defensive third baseman in the league winning multiple Gold Gloves with the Indians, Rangers, and Reds. And his grandfather, Gus, started the familly's MLB tradition by being a mainstay for 15 years. David had his best year in 1999 with the Seattle Mariners, and his second highest home run total came with the San Francisco Giants in 2002. Gee, wonder how he got those inflated stats?

Don’t sleep on Steve Jeltz. He is one of the worst players documented so far in the All-Time Snark team series, not just at shortstop. It’s no wonder the Phillies lost 96 games this year and probably accelerated HOFer Mike Schmidt’s retirement. Who would want to stick around for this crap, anyway?

Ruben Amaro Jr is perhaps the most despised sports figure in the City of Brotherly Love since Terrell Owens. His recent signing of starting pitcher AJ Burnett for 1 year/$16million just reeks of desperation and stupidity. His play on the field wasn’t an improvement, in case Phillies fans were wondering what credentials he has for the position. None would be the answer. Pat Burrell was supposed to be the solution to the Phillies woes, along with Scott Rolen, Bobby Abreu -- who's trying to make a comeback with them this spring -- and Jimmy Rollins in the late 1990’s-early 2000’s. The Phillies were supposed to be a force in the NL; unfortunately, the St. Louis Cardinals and Houston Astros went toe-to-toe on a couple of occasions during this time, and the Braves ruled the roost in the NL East. Is 2014 the year that finally leads to change in the front office in Philly?

We’re 5-5 on 20-loss seasons by Phillies starters, which explains why this was the first franchise to reach 10,000 losses. That is sustained longevity, but not necessarily in a good way. As you can see by the grouping of the years, the Phillies' first 50 years of existence were about as productive as high school kids in June. It’s hard to believe the Phillies were so bad in the 1930’s, since those teams had the likes of Dolph Camilli and Chuck Klein, and my astute readers will surely recognize All-Snark team catcher Bill Atwood was on those teams too. Clearly, none of these pitchers are anywhere near the caliber of 1972 Steve Carlton, who won nearly half his team's games with a record of 27-10, which remains one of the greatest modern seasons posted by a starting pitcher.

Now, this has to be one of the worst bullpens assembled for the All-Time Snark teams. What’s remarkable about Callahan’s 1894 season is he didn’t have to face the remarkable outfield on his own team, where Billy Hamilton, Sam Thompson, Ed Delahanty, and even backup Tuck Turner all hit over .400 in the same season. I guess he still had to face Hugh Duffy, George van Haltren, Cap Anson, and Wee Willie Keeler. Now you see how quickly a reliever’s OAV can balloon to near .400. What’s interesting about Holzemer’s season is that was the year of the infamous trade that sent Curt Schilling to the Diamondbacks as the Phillies essentially threw in the towel and started using pitchers like Holzemer, because in all seriousness, what difference did it make?

Here we have a repeat offender in Brad Lidge; he's also the closer on the All-Time Snark team Houston Astros. Incidentally, I’m just as surprised as you at the number of repeat players who have been selected to their respective Snark teams thus far. The Phillies were banking on Lidge to duplicate his success from the previous season when they won only their second World Series title in franchise history, over Tampa Bay. He only pitched one inning in the 2009 World Series against the Yankees serving up three runs in the top of the ninth in Game 4. Lidge never saw the mound the remainder of the series, giving way to Ryan Madson and an aging Pedro Martinez. It’s too bad that Lidge will forever be remembered for giving up that bomb to Albert Pujols (see the video on the All-Snark Astros page) because he was a dominant reliever before this mid-life crisis. Still, his success in Philly was short-lived, but he got himself a nice ring!

This is going to be a very interesting season for the Phillies. Ryne Sandberg takes over for Charlie Manuel as manager, and Ruben Amaro Jr is at the top of the list for first GM to be fired. The Phillies seem to be adding payroll and age to the roster where they should be doing the opposite, but it’s not like there's a team out there dying to take on Cliff Lee's, Cole Hamels', or Ryan Howard’s contract. The one high-priced veteran who was performing decently, Roy Halladay, decided he had enough and retired abruptly in the off-season. Halladay didn't distinguish whether or not he had enough of baseball in general or the Philadelphia Phillies in particular.

After Amaro signed Marlon Byrd, Burnett, and Bobby Abreu to contracts, Philly fans have probably had enough of Amaro. These are no Whiz Kids.